For this project, twenty-one nurses or educators were interviewed. They represent graduating classes as early as 1947 and as late as 1978 and include one faculty member.  Seventeen women and four men were interviewed. The nursing students came to Madison General from around the country, while others were Madison born. They continued their education or moved along to careers in a variety of fields or specialties of nursing across the United States.

Madison General Hospital School of Nursing was a three-year diploma program. The training began with classes at the University of Wisconsin such as Anatomy and Physiology and Microbiology. Next, the students had a blended education of classes taught by Madison General Hospital School of Nursing faculty, hospital physicians and staff as well as clinical rotations there. Students had the opportunity to have clinical rotations at other hospitals in the area, such as Mendota Psychiatric Hospital, the VA Hospital, Milwaukee Children’s Hospital or Cook County Hospital. 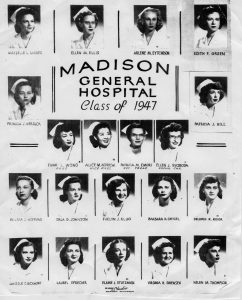 Below can be found the narrative for each person interviewed for this project.

Click on each link to access the audio, summary and transcript for each oral history. Note: Also included with each narrator’s name is their oral history number, maiden name (if known), and graduating class.

This project would not have happened without the administrative support of the Meriter Foundation and consultation from Mary Pautz, MGH Class of 1960. The interviews were conducted by student workers Faith Hoffmeyer and Lea Goldstone, processed by student Sophie Clark. The interviews were transcribed by Teresa Bergen all of which was overseen by Troy Reeves, Head of the Oral History Program at UW Madison. The teams at Digital Library Services & the Shared Development Group, particularly Jesse Henderson, Karen Rattunde, and Steven Dast put these histories online.

Here are two reflections written by Sophie and Faith. Here is a UW Libraries news article on the MGH Nurses Project. 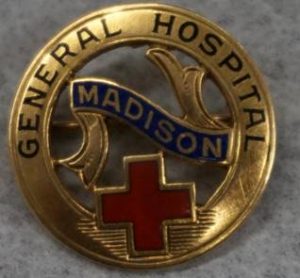