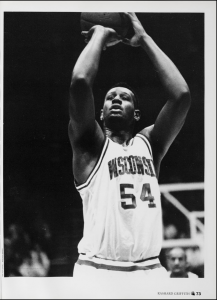 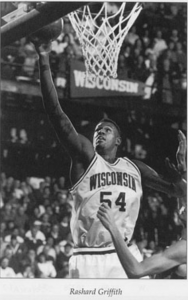 Rashard Griffith was an undergraduate and basketball player at UW. After being picked by the Milwaukee Bucks, Griffith transitioned to a robust career playing basketball overseas in Turkey, Romania, Italy, Spain, and Puerto Rico. In 2017, Griffith returned to UW and completed a degree in Community and Non-Profit Leadership in the School of Human Ecology.

In his interview with Troy Reeves as part of the African American Athletes series, Griffith discusses his early experiences and relationship with basketball as a young man in Chicago, his time as a collegiate basketball player, his career playing basketball in Europe, his retirement and work as a trainer with children, and his return to UW. 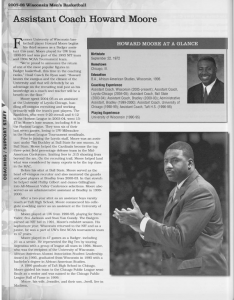 In his interview with Troy Reeves as part of the African American Athletes series, Moore discusses his interest in basketball, his recruitment and initial experiences at UW, his experiences playing in the Field House and as a student athlete, his work in recruitment and coaching, and the relationships he has built in Madison.

Glen Walker discusses his brother Melvin Walker’s time as a football player for UW, and his 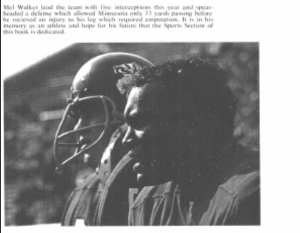 remembrances of working a summer job in Madison at the Ohio Medical Company. Glen’s brother, Melvin Walker, was a high school basketball and football player in West Virginia. After deciding to focus on football, Walker played as a defensive halfback for UW. In 1967 Walker was injured in a game versus Minnesota, as a result of which his leg was amputated. Melvin was employed by the Oscar Mayer company, and later worked for West Virginia State University.

In his interview with Troy Reeves as part of the African American Athletes series, Glen describes his brother’s early life and interest in sports, athleticism within his family and family life, and his brother’s athletic injury and resulting amputation. Walker discusses his time at the Ohio Medical Company in Madison, living with his brother Melvin, and general remembrances of his brother and his family. 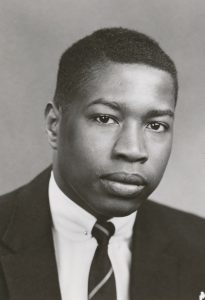 Earl Hill was a football player and a student in the School of Commerce at UW-Madison from 1955-1960. Prior to that time Hill had grown up New Rochelle, New York, attending New Rochelle High School and playing various sports while there. In his 2015 oral history interviews  with Greg Bond, Hill discusses his time at UW as a student athlete as well as his post-collegiate athletic and business work. Hill recalls his athletic and academic transition to UW as well as his experiences with freshman and varsity football. Of particular import are Hill’s memories of the racial realities he experienced as a college football player. He talks about his friendship with fellow African-American student athlete Sidney Williams, his knowledge of the LSU-UW football controversy (see Haney article, “Cancelled due to Racism…”), and playing at Miami during his senior year. Hill discusses football in detail, from the particulars of playing defense and punting to the improvement of the football team during his time at UW. 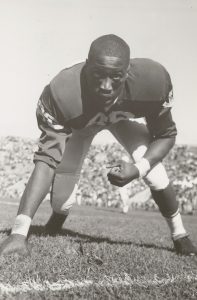 Hill also speaks about his academic and social life in Madison. Specifically, he recounts his friendships, both with Badger teammates and also those he made through intramural athletics with members the reactivated UW chapter of Alpha Phi Alpha (the country’s first Intercollegiate African-American fraternity). Hill recalls the difficulties he experienced in finding an apartment in Madison in the early 1960s.

Hill details his post-college career, from his tryout with the Chicago Cardinals of the NFL and his brief stint with British Columbia Lions of the CFL to his work at the Social Security Administration and eventually at IBM. He recounts some racial trouble with a client in Kansas City and the strong support he received from his manager. He talks about his long career at IBM and his subsequent college teaching career. This interview was conducted for inclusion in the “African-American Athletes at UW” series within the UW-Madison Oral History Program’s collection. 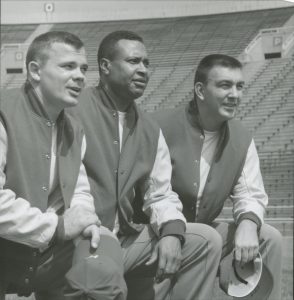 Lewis “Les” Ritcherson, Sr. was an assistant coach for Badgers football from 1966-1969, and the first African-American football coach at the University of Wisconsin. In his 2012 oral history interview, Ritcherson talks about his transition from Waco, Texas to Madison, the racial climate on campus in the 1960s, the difficulty of being the only minority on the coaching staff, and the treatment of African-American football players. In 1970, Ritcherson was hired as the Affirmative Action Officer at the University of Wisconsin-Madison, and he describes his experiences working in administration until his retirement in 1990. 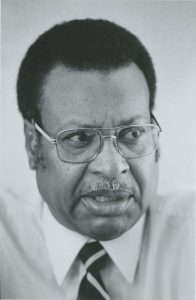 Born and raised in Waco, Texas, Ritcherson was a star athlete in high school and vice president of his graduating class. While attending Wiley College in Marshall, Texas, Ritcherson was a stand-out football player, elected as team captain in his senior year. After graduating with a degree in education, Ritcherson began a 16-year run as head coach of Moore High School football in Waco. His team won two “Negro State Championships” in the segregated Texas high school football league, and Richterson compiled a career record of 132 wins, 38 losses, and 3 ties. In 1960, Ritcherson earned an MA in Guidance from Prairie View A&M, before beginning his coaching career at UW-Madison in 1966. 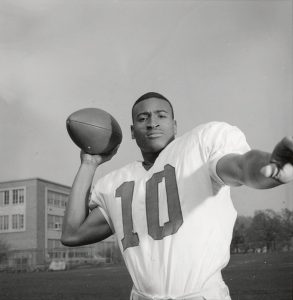 Lewis Ritcherson, Jr. was a quarterback for the University of Wisconsin football team from 1966 to 1970. In his 2012 oral history interview, Ritcherson talks about his recruitment as a star high school football player in Waco, Texas, his decision to join his father at UW-Madison, and his transition from Waco to Madison. Throughout his interview, Ritcherson sheds light on racial tensions in the athletic department and the difficulties many African American students faced at the university in the 1960s and ’70s.

Ritcherson describes his personal experience with campus unrest of the late-1960s, including the Dow Riots in 1967 and the Sterling Hall Bombing. He discusses the reaction of African-American students to the assassination of Martin Luther King, Jr., the Black Student Strike of 1969, and the inner conflict he felt, as a visible African-American student, between the duty to attend classes and the desire to support strike.

After graduation, Ritcherson became an admissions counselor for UW-Madison. In his interview, he reflects on his mandate to attract minority students from surrounding cities, and he ends with his career transition to Director of Minority Services at UW-River Falls. This interview was conducted for inclusion in the “African-American Athletes at UW” series within the UW-Madison Oral History Program’s collection. 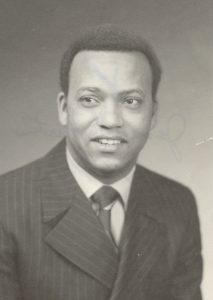 A lifetime-Midwesterner, Judge Jim Martin’s connections to UW and the city of Madison are many. Martin was a coach for the UW-Madison football team from 1970-74 and a student at the University’s Law School from 1974-76. Afterward Martin went on to serve Madison’s court system as a city attorney and later as a judge, roles he occupied for a combined 30+ years. In his 2016 interview with Greg Bond, Martin discusses his life broadly, from his childhood in Racine, Wisconsin to his judgeship in Madison. Martin talks candidly about the realities of racism and segregation, explaining the political climate of his youth through his experiences as a black student-athlete. 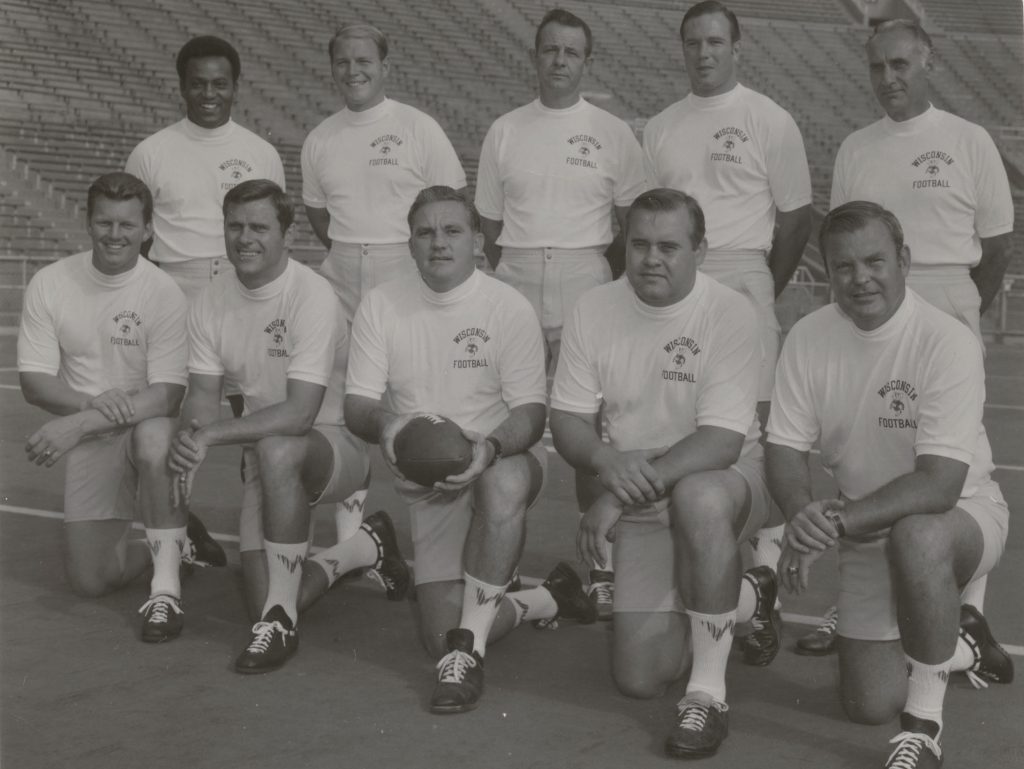 physical education briefly, later transitioning into coaching college football at UW-Madison, an experience Martin discusses in detail in his interview.

After four years of coaching, he decided to stay in Madison and pursue a new career path, leading to his work in the field of law. But while the ascendancy of his legal career marked the end of his coaching tenure, Martin stayed connected to sports, playing in Madison city leagues and refereeing for years after. This interview was conducted for inclusion in the “African-American Athletes at UW” series within the UW-Madison Oral History Program’s collection. 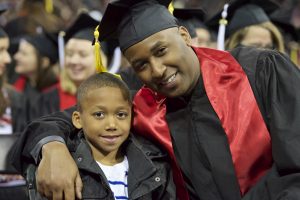 Lamar “Soup” Campbell has led a life marked by both academic and athletic success. Campbell played football as an undergraduate at UW from 1994 to 1998 but left the university short of achieving his degree. Campbell entered the NFL as a free agent in 1998, signing with the Detroit Lions. He then played five seasons as a cornerback for the team, from, leaving the NFL in 2004.

After working at occupations ranging from an NFL front office job to real estate to hosting a radio show called “After the Game”, Campbell returned to UW-Madison in 2014 to finish his undergraduate work. Following graduation, Campbell earned a master’s  in the Department of Educational Leadership and Policy Analysis in 2016.

In his 2015 interview with Troy Reeves, Campbell discusses his time at UW, both as undergraduate in the 1990s and later as a non-traditional undergraduate and graduate student. He also talks about playing in the NFL and his career life after, including his radio show “After the Game”. Campbell currently serves as assistant athletic director for student-athlete engagement. This interview was conducted for including into the “African-American Athletes at UW” series within the UW-Madison Oral History Program’s collection.

Image credit: Campbell with his son, Jayden, at Winter Commencement, Photo by Rick Marolt, courtesy of Board of Regents of the University of Wisconsin System.

“After the game ends, UW-Madison helps athletes return to the classroom” — Susannah Brooks