The 61st Annual Grammy Awards ceremony will air Sunday, February 10, 2019, at 7 p.m. CST, on CBS. Jim Leary will be there at the Staples Center in Los Angeles, seated somewhere far from the stage most likely. The Grammy for which he is nominated–Best Album Notes, for Alpine Dreaming: The Helvetia Records Story, 1920-1924–will be awarded at an afternoon ceremony prior to the telecast, which seems fitting somehow for this self-described “jackpine savage” from Rice Lake who has been engaged in behind-the-scenes labor as a folklorist for many decades. Leary has been lauded in the local media recently in the run up to the event, and we have assembled the following list:

We know it won’t be long before he returns to Madison and resumes his work on Local Centers/Global Sounds: Historic Recordings and Midwestern Musical Vernaculars, and perhaps developing more ideas for collaborating with our friends at Archeophone Records. Three of the six nominees in the Best Album Notes category this year are Archeophone releases: 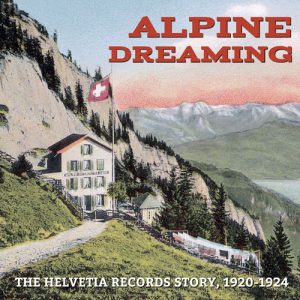 Jim Leary would be the first to let people know he might be the one who received the Grammy nomination, but it took the work of many to create Alpine Dreaming. Leary called upon colleagues and friends from nearby and around the world for assistance, and the 2-CD set was produced by Archeophone Records in cooperation with Mills Music Library and the Center for the Study of Upper Midwestern Cultures, with partial support from the National Endowment for the Humanities.

[Epilogue: The Grammy went to David Evans, for Voices of Mississippi: Artists and Musicians Documented by William Ferris, which also won the Grammy for Best Historical Album.]