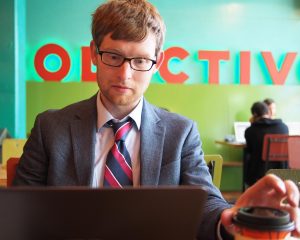 While visiting Madison in May, I was excited and pleased to work in Memorial Library and begin revising my dissertation with the impressive collection of Dutch literary and theological works in the Tank collection. My project focuses on how pan-Protestant sentiment forged cultural and literary connections between the peoples of Northern Europe. Based in an English department, I’m especially interested in English identification with coreligionists on the Continent and the alternative literary communities formed through such identification. Increasingly, scholars have recognized that the early modern period was pre-national, and thus a full account of literary history demands attention to collaboration and exchange across borders. While my dissertation focused primarily on English authors, I realized that a complete understanding of even English authors requires a multilingual approach.

The Tank collection, of course, is one of the largest collections of early modern Dutch literature in the country, and many of the works are especially germane to my project. I spent my first weeks exploring the collection of pamphlets, especially those covering the Dutch Revolt. These are useful for two reasons: first, many of them were reprinted in England as part of international news networks, documented recently by Jayne Boys. Also, however, they illuminate how the Dutch were viewing the key figures and meaning of their war against Spain, which can sometimes conflict with the primarily religious reading of the event favored by English Protestants. Often, however, English and Dutch histories run parallel, and the Dutch tried to stress the importance of Protestant unity. One pamphlet, for example, claims to reveal the Spanish king’s plot to conquer all of Protestant Europe (image 1). With the pamphlets, I read longer histories of both the Dutch Revolt and the Thirty Years War. My dissertation focused on the reception and representation of Protestant heroes because they played such important roles in uniting the Protestant communities. Cornelis Danckaertz’s history of the Thirty Years War, for example, centers on the involvement of Gustavus Adolphus, the Swedish king and Protestant champion, and celebrates him as a hero of the church. This work wa 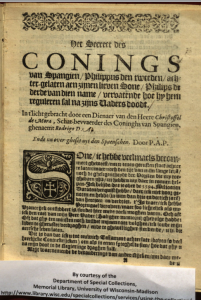 s especially useful for an article I’m working on, which explores the celebration of Gustavus as “the defender of the German Liberty.” Oddly, the conquering Swedish king was celebrated as a champion of liberty in all Protestant lands; the meaning (and political danger) of the epithet, however, varied significantly in the empire, the Dutch Republic, or Caroline England.

After finishing with the pamphlets and histories, I moved on to church histories in the collection. Tank is especially rich with theological resources, and the works on ecclesiology – one of the most prolific genres in early modern Europe – serve as a base for many contemporaries as they theorized their connection to other Protestants. This exploration, too, is transnational, in that writers often wrote in Latin and were part of the international ‘Republic of Letters’; more interestingly, I think, their theology of the church provides the foundational metaphors for the ‘imagined religious community,’ which continued to compete with the emerging nation even after the fragmentation of the Reformation. Works like ‘t Lof de Kercke, which lists hundreds of biblical metaphors for the church, demonstrate both the complexity and depth of this invisible community (image 2). 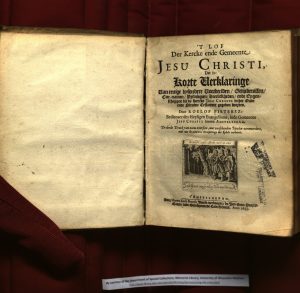 Finally, during my last days in Madison, I turned to translations of English works: Samuel Purchas Pelgrimagie, Alle de werken van Mr. Wilhelm Perkins, Contemplationes Sionis (by the English Bishop Joseph Hall). I hoped to both track the literary exchange evidenced by the translation and also begin the provisional stage of my next project, which will focus on the role vernacular translation played in uniting a pan-Protestant literary field.

The city, library staff, and the materials themselves were all a pleasure, and I’d like to send my deepest appreciation to the Friends for making the trip possible. This was my first research trip after receiving my Ph. D. this past May, and it was enjoyable and productive – and certainly shaped the direction of my future research.