Nothing to Hide Archive Project

The UW-Madison Archives – a department of the UW-Madison Libraries was recently awarded a $12,000 grant from the Evjue Foundation to fully digitize 650 unique and at-risk videotapes in the Nothing to Hide Archive. Created by David Runyon in 1981, Nothing to Hide was a weekly television program on WYOU which focused on LGBTQ+ issues. The program ran for a remarkable 20 years until Runyon’s death in 2001. Preserved on now fragile and decaying magnetic media (U-Matic and VHS tape), there is an urgent need to digitize these recordings before their content is lost.

“We are so grateful to the Evjue Foundation for their support of this important project,” said David Pavelich, Director of Special Collections and Archives at UW-Madison. “Libraries and archives cannot possibly achieve all of our goals without investments like this. We’re incredibly fortunate to have the Evjue Foundation this close to home!”

In 1981, Runyon split from the local WYOU television program Glad to be Gay to create his own weekly program, Nothing to Hide. The new program focused on LGBTQ+ issues, capturing local and national events and featuring both local and national figures. Internationally known writers, politicians, and activists featured on the show included Eve Kosofsky Sedgwick, Angela Davis, Howard Zinn, and Toni Morrison, among others. The many local and regional luminaries who appeared on the program included George Mosse, Tammy Baldwin, and Dick Wagner.

Nothing to Hide created a unique video record of historically important events in Wisconsin and United States history. For example, Runyon’s program documented LGBT civil rights marches in Washington, D.C., in 1979, 1987, and 1993, and here in Madison in 1989, 1991, and 1996. The program recorded and broadcast documentary footage of Governor Lee Sherman Dreyfus’s statement at the signing of AB70, which made Wisconsin the first state in the nation to ban discrimination based on sexual orientation in employment, housing, and public accommodation. Another program documented the signing of the consenting adults law on May 5, 1983, which repealed the earlier “sexual perversion” law.

A wide variety of subjects were covered in the 20 years of Nothing to Hide’s programming. Coverage of the AIDS epidemic, for instance, began in 1983 and continued into the 1990s. Runyon produced episodes on the subjects of gays in the military, coming out, and community health issues. The program featured performances by local and national gay and lesbian theater and musical groups such as the Lionheart Gay Theater (Chicago) and the New Orleans Gay Men’s Chorus. Several conferences – including the Black and White Men Together National Conference and the Annual International Gathering of Gay and Lesbian Elected and Appointed Officials – were filmed from the late 1980s into the 1990s. 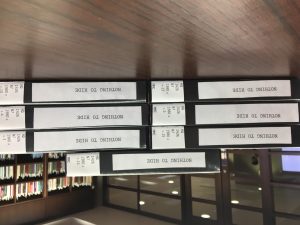 The Nothing to Hide Archive came to the UW-Madison Libraries in 2009 through the energy and advocacy of local faculty, students, and community members, who recognized the incredible value of the collection and realized the urgent need to preserve it. The primary source of these archival videotapes was WYOU, which had retained 800 recordings of the program. Local LGBT advocacy center OutReach owned another 50 tapes, which were deposited there by Runyon.

“This digitization project illustrates many of the objectives of modern archives,” said Pavelich. “We are no longer simply tasked to archive paper in boxes, but to rescue and provide access to various forms of obsolete media from magnetic videotape (which decays quickly) to word processing files created on long-dead operating systems. And we are committed to gathering and sharing the full story of our diverse community, not just the story of one dominant viewpoint. Our archivists and librarians are working hard – every day – to secure the puzzle pieces of our history.”

“Grants like this allow us to make one of a kind collections such as Nothing to Hide, which was at great risk from decay and deterioration, available for use in teaching and research for generations to come,” said Doug Way, Associate University Librarian for Collections and Research Services.