College Library is pleased to announce that after months of delicate negotiation, Red Bull USA has secured the naming rights to the 24-hour library at the University of Wisconsin. College Library will henceforth be known as the Red Bull Research Academy. Upon confirmation of the deal with university and library administration, Merle Andrews, head of marketing for Red Bull, released a statement confirming the company’s commitment to caffeinated study. “With this merger, Red Bull expects to attain a new level of synergy in the energy drink/scholarly research crossover. Not only will Red Bull give you wings, it will now give you books, DVDs, video games, laptops, music, magazines, and much, much more.” Carrie Kruse, newly-appointed director of RBRA, indicates that changes to the former College Library will be gradually implemented over time. “At first we’ll see an increased number of Red Bull energy drink options in vending machines and  Red Bull will become the exclusive beverage of Open Book,” she reports. “Over the next six months we’ll be transforming the third floor quiet study into an extreme sports venue with skateboard ramps and a BMX course. We believe that students will embrace our definition of active learning.” 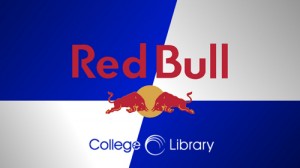