In light of recent news re ports and striking video of an eruption from Kilauea volcano on Hawaii’s Big Island, we revisit here some of our holdings about Kilauea, Hawaii, and volcanoes more generally.

James Dwight Dana’s Characteristics of volcanoes (1890) carried forward his studies of geology and coral reefs and included, per its title, “a historical review of Hawaiian volcanic action for the past sixty-seven years” – that is, back to 1823. 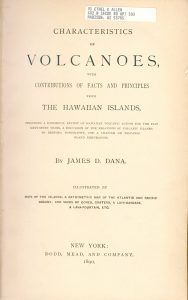 Our copy of the New York edition was the gift to the Libraries from Ethel Allen, perhaps better known on campus because of Allen Centennial Garden, named after Oscar and Ethel Allen, and her generous bequest in support of many programs of the College of Agricultural & Life Sciences (and Steenbock Library). The title page still bears her address label.

In particular, Dana described “a great increase of activity in Kilauea” in May-July 1866, just the year that Mark Twain visited Hawaii (then characterized as the Sandwich Islands) as special correspondent for the Sacramento Union. Twain visited the Kilauea Volcano House, a small, newly constructed hotel that succeeded a primitive one-room version, for a firsthand view of what he would describe as a “boiling, surging, roaring ocean of fire!”

Our pamphlet of Twain’s Strange dream, one of a handful of copies recorded in WorldCat, is part of our George H. Brownell and Norman Bassett collections of the works of Mark Twain, which contain many ephemeral materials by and about Twain (1835-1910) as well as many first periodical appearances and early publications. Our copy is heavily annotated, both by Brownell and W. F. Frear of Honolulu, from whom Brownell received it as a gift. Brownell recorded that “Frear corrections follow version as tale was originally written by Twain, in 1866, in Visitors Register of Volcano House,” citing Frear’s letter of April 29, 1938.

Lawrence Downes, in “Mark Twain’s Hawaii” for the New York Times (2006), called Twain’s letters from the Sandwich Islands “still fresh and rudely funny after almost a century and a half.” For a sample, see our copy of “Sandwich Islands: Views of Mark Twain. A characteristic letter from the humorist,” from an issue of the New York Tribune [1873]. Call number: Mark Twain Bassett Pam. 8 flat.

For more on “The Volcano House,” see Hawaii nature notes. The publication of the Naturalist Division, Hawaii National Park and the Hawaii Natural History Association, 5:2 (Nov. 1953). The National Park Service has also digitized the Volcano House visitors’ registers. Pages 57-60 of the transcript of volume 1 and the last few pages of volume 1 of the Registers offer more concerning “Mark Twain’s strange dream.”