The UW-Madison Libraries recently acquired a true first edition of Thoreau’s Walden, Or Life in the Woods published in 1854 by the Boston firm Ticknor & Fields. Its physical aspect is surprisingly humble for a book that has had such resonance and influence. This copy is in its original brown binding. It would not catch one’s eye. 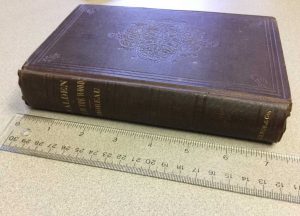 The title page has a drawing of his cabin at Walden Pond by Thoreau’s sister Sophia. Like many books of its time, there are advertisements in the back pages. Walden did not come with a dust jacket.  It is often called a “memoir” but is really so much more. There is a simple map of Walden Pond in the book. 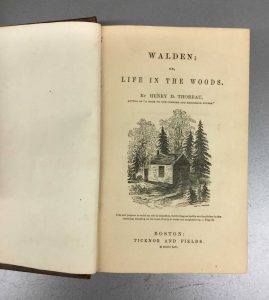 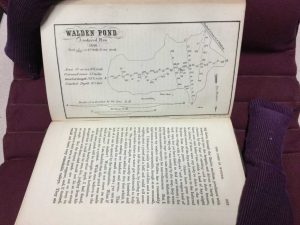 Our first edition of Walden was owned previously by Isaac A. Pool, a printer from Chicago who was born in New York around 1826. Pool published The Northwest Banknote and Counterfeit Reporter. He also may have worked as a florist. He was not yet married in 1854 when Walden was published but we know from census records that he did marry two years later. He did not make notations in the book. 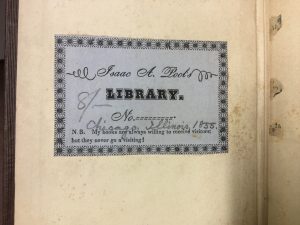 There are many editions of Walden. Here’s a colorful array of some of our well-used circulating copies. 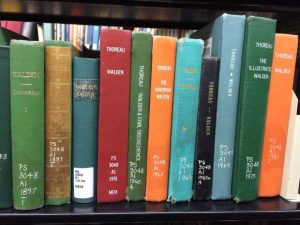 There are hundreds of translations of Walden. 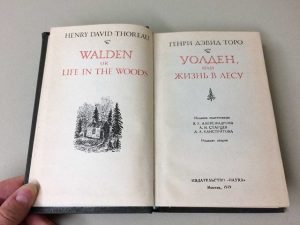 Bicentennial birthdays of well-known authors are occasions for reexamining and reviving their important works. There is a Thoreau Bicentennial of course. Walden and Thoreau are enjoying much attention this year with anthologies of essays, biographies, works of fiction starring Henry David himself, and fresh editions of Thoreau’s writings. One such example is UW Madison’s Jonathan Senchyne’s fine essay on Thoreau, print culture, and pencils (the family business) which appears in the just-published Oxford Press book Henry David Thoreau in Context.

Thoreau is always an observant and reflective writer. He is also an amusing and sometimes satirical writer. He is certainly quotable. I wonder how he would feel about today’s lively market for t-shirts and mugs featuring his image and his words. I imagine the situation might inspire an essay from him that would generate more quotes.