In celebration of Earth Day, we look back to a memorable acquisition — the 1,000,000th volume in the University of Wisconsin-Madison libraries, gift of Research Products Laboratory: 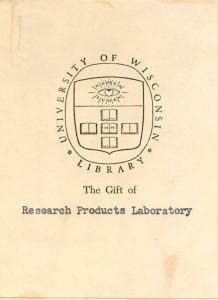 Hutton’s work in fact runs to three volumes in complicated bibliographical succession. The first two volumes appeared in 1795, constituting parts 1 and 2 of the four promised on the title-pages of those volumes.

Part 3 (i.e., volume 3) was not published by the author, but remained in manuscript until it was edited by Sir Archibald Geikie and published in London, by the Geological Society, Burlington House, in 1899. It comprised the unpublished manuscript of chapters IV-IX of volume 3 as planned by the author and found after his death.

Hutton, who has been called the founder of modern geology, introduced his subject as follows:

When we trace the parts of which this terrestrial system is composed, and when we view the general connection of those several parts, the whole presents a machine of a peculiar construction by which it is adapted to a certain end. We perceive a fabric, erected in wisdom, to obtain a purpose worthy of the power that is apparent in the production of it.

According to V. A. Eyles, author of the entry on Hutton in volume 6 of the Complete Dictionary of Scientific Biography (Charles Scribner’s Sons, 2008), “ … ‘from principles of natural philosophy,’ [Hutton] attempted to arrive at some knowledge of the order and system in the economy of the globe, and to form a rational opinion as to the course of nature and the possible course of natural events in the future.” In particular, Hutton demonstrated that “the process of sedimentation is cyclical in operation.”