Origin of the Collection 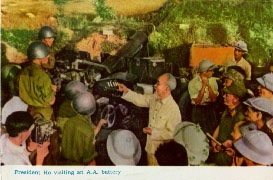 The “Communist Propaganda from North Vietnam” collection came to Memorial Library Special Collections via the archives of the State Historical Society of Wisconsin. The materials were collected by members of the Teachers Committee for Peace in Vietnam. The TCPV was formed in 1965 by teachers and students in the United States who opposed the war in Vietnam, and were interesed in educating others about the conflict.

For more information about the TCPV, researchers are encouraged to view the manuscript portion of the collection, which remains at the Historical Society Archives. Read a copy of the catalog record, or visit the Archives online at http://www.wisc.edu/shs-archives/, and search the online catalog (ArCat).

Although we cannot be certain, it appears that the materials in this collection were created in Vietnam. Some of the caption sheets were written in both English and French, and the grammar is not that of a native speaker. Unfortunately, there is no record of how the TCPV obtained the materials.

Description of the Collection

The “Communist Propaganda from North Vietnam” Collection is primarily a visual collection. It contains approximately 175 black and white photographs, grouped into thematic units. These photographs record several types of military, economic, and political activities. Sample photographs from the collection can be viewed when examining individual caption sheets.

This collection, however, is more than a just random grouping of photographs. With a single exception, each group of photographs arrived with a detailed caption sheet, individually typed onto rough paper. There is also one caption sheet that arrived without the accompanying photgraphs. Most of these caption sheets begin with an introduction that ties the photographs together by topic. The accompanying text is valuable not only for the information it contains about the photographs, but also as instruments of propaganda in its own right. In other words, the captions are not only descriptive but also interpretive.

Please note: The caption lists are transcribed verbatim. All misspellings and inaccuracies are present in the original.

Unlike the photographs, the color leaflets do not have caption sheets. These materials appear to have been printed for a wide distribution. Each leaflet contains a color image with a short caption, and a longer slogan that has no direct relationship to the image. Leaflets are printed on one side only, and some arrived folded in half. The collection includes approximately ten different examples of this type of propaganda.

Memoirs and Oral Histories of the Vietnam War