The Beauty of This World 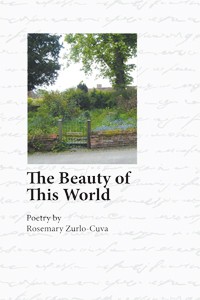 The Beauty of This World transports us from the moody gray waters of Lake Michigan and the calming sunsets of Door County to harrowing Irish cliffs and the Wiltshire Dorset borders of England. These poems speak quietly and eloquently of the poet’s longings and early memories, grown vaguer, gauzy with time, whether telling family stories of an immigrant grandmother or the difficult birth of a daughter and the sweet curve of her moonlit cheek on a New Year’s Eve walk in the woods.Invoking Rilke, Zurlo-Cuva writes, the knowledge of impermanence haunts our days with its fragrance. The fragrances that linger from this wise collection are ones of sustenance and splendor.

Rosemary Zurlo-Cuva grew up in Milwaukee, got her undergraduate degree at the University of Wisconsin-Madison, and has lived there ever since. She works as a journalist, editor, and writing teacher. Her novel, Travel for Agoraphobics was published as an e-book in 2011.

The Beauty of This World is available for purchase through Parallel Press for $10.00. Discounts are provided for libraries, booksellers, and non-profit organizations.

Door County Sunset
We find the rockers, you and I
when the evening is spread out against the sky—
no, we aren’t going there—on the limestone
porch behind the visitor center;
and I recall the priest who married
us, who in his homily envisioned
our many years ending
with two codgers rocking side
by side. Had he imagined this rosy
orange light splayed over
the water, your fingers curled
around mine, face etched in a backlit
dusk as the first star makes
its shy presence known?