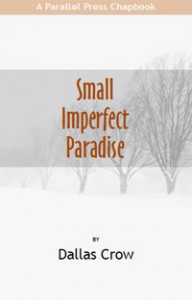 In Small, Imperfect Paradise, Dallas Crow unflinchingly explores themes of love, sex, growing up, and growing older.  The spine of the narrative is the speaker’s progression through a relationship, from the early possibility and romance, through marriage and parenthood, and on to the painful dissolution.  The titular poem identifies a moment of stillness in this progression, where two realities exist, one aching, and one idyllic:  that of the husband and wife, whose relationship is over, and that of the sleeping children, who do not yet know.

The small, imperfect paradise that Crow writes toward is shattered in “Separation”: “Like a home movie played backwards,” Crow intones, “the gifts / are rewrapped and taken away, the guests / sidle awkwardly out, and then your children leave, / smiling and waving.”  In this collection, Crow creates a Möbius loop that mirrors the human experience; the poems wind through startling pain and realization and then loop back to hope and love again and again, each experience simultaneously fractured and precious.

Dallas Crow grew up in small towns in Michigan, Iowa, Ohio, and Wisconsin, and attended Oberlin College. He now lives in St. Paul, Minnesota and teaches high school English at Breck School in Golden Valley, Minnesota. His poems have appeared in many periodicals (including English Journal, Poet Lore, and Tar River Poetry), two anthologies, and—as part of a public art project—in the sidewalks of St. Paul. He has also published a number of essays on contemporary poetry.

A review of Small, Imperfect Paradise appeared in the Fall/Winter 2013 issue of Whistling Shade, calling the chapbook an “unlikely page-turner.”

Small, Imperfect Paradise is available for purchase through Parallel Press for $10.00. Discounts are provided for libraries, booksellers, and non-profit organizations.

In their bedrooms teen boys prance
à la Freddie Mercury, fancying
themselves in tights and ballet slippers—
so très charmant, my dear—but
to avoid post-school pummelings
their apparel proclaims allegiance
to Aerosmith, Zep, the home team.

Kids who have never heard of James Dean,
the adults’ autumnal rectitude:
I’ve never been so happy to be dead!
Mothers, you only see some of what you see.

Amid the corn and soybeans and blue tv glow,
we are approaching the pole of inaccessibility,
where summer brings with it a kind of despair,
as do winter, spring, and fall.
Future farmwives of America, prepare
yourselves: you only see some of what you see.