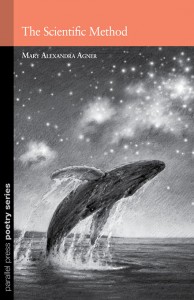 Many of the poems examine the legacy of women scientists, mathematicians, and medical practitioners. In After Math, the poet recalls Florence Nightingale: “To the modern world, / pictures are not epiphanies. / Lump together all those bodies— / summed and graphed by hand— / and the nineteenth century / would ache with rot and TB / where today we see a piechart.” In the lines of Jump the Chromosome, the poet asks Nobel Prize winner Barbara McClintock “Teach me to leave off counting, / reverence the difference of a single aberration.” The poems that make up The Scientific Method are found at the intersection of scientific inquiry, humanity, and gender, and invite reflection and thoughtful examination.

Mary Alexandra Agner lives in Massachusetts. Her writing has appeared in The Raintown Review, The Flea, Astropoetica, and Science. She can be found online at http://www.pantoum.org.

A review of The Scientific Method appeared in the May-June 2012 issue of American Scientist (Vol. 100, No. 3). Writes reviewer Sarah Glaz, “[The poems] are intelligent and well crafted, and written in a variety of styles—mostly free verse, with a few more-traditional poetic forms. The book has a strong feminist flavor. The collection displays, and encourages, a lively intellectual curiosity. The sense of mystery created by the poet’s biographical note persists throughout the volume: I frequently found myself intrigued by the biographical or scientific information glimpsed in a poem and was compelled to search out more.”

The Scientific Method was reviewed by Judy Barisonzi in Verse Wisconsin Issue 109 (2012). “Agner,” writes Barisonzi, “portrays [women scientists] as fascinated by the “finite mystery“ (“Perception Test”) of the world science reveals to us, and as motivated by humanitarian zeal.”

Teach me to leave off counting,
reverence the difference of a single abberation.

Give me your thirty years of patience
waiting for the world to listen to your truths.

I want to jump the chromosome.

What twists of self, what sister strands,
remain inside my rings, never expressed?

Take me underneath the microscope’s fierce light.
Teach me how to self-pollinate.