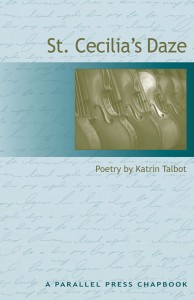 Australian-born Katrin Talbot has found many opportunities to combine her love for music and word.  One such opportunity is her chapbook of poems, St. Cecilia’s Daze, the newest publication from Parallel Press.  In this homage to St. Cecilia, the patron Saint of Music, Talbot writes “As I’m currently living in the comfort zone / where Bach wrote his Preludes and / Fugues, / where life still makes sense / in these keys, / I think I’ll sneak in a slow trill for a few months / before I decide on a direction / because / I’m in no hurry to / modulate.”

Talbot is a violist and has written poetry since she was six, spending time under an almond tree in Australia, pounding away on an Olivetti. She has a B.A. from Reed College and an M.S. from UW–Madison. Her poetry has appeared in The New Plains Review, Fresh Ink, Free Verse, Bravado, Your Daily Poem, Zoland, Inertia, Ginosko, Verse Wisconsin, the If and Manorborn Poetry Journals, Eating her Wedding Dress (Ragged Sky Press), Empty Shoes (Popcorn Press), And Again Last Night (Indigo Dreams), An Anthology of Contemporary Love Poems (Blue Fog Journal), Not A Muse (Haven Books), Chopin with Cherries (Moonrise Press), Wisconsin Poet’s Calendars, and in the upcoming anthologies: Collecting Life, Vicious Verses and Reanimated Rhyme, The Bridges of New York, Tribute to Orpheus II, and The Poetry of Travel. She was nominated for a Pushcart Prize in 2009.

Music has always been a sustaining part of her life.  She has worked with such groups as Pro Arte Quartet, The Bach Dancing and Dynamite Society, the Red Hot Lava Chamber Music Festival, the Boulder Bach Festival, the Oakwood Chamber Players, the American Sinfonietta, the Madison Symphony Orchestra, and the Wisconsin Chamber Orchestra. Her dirty little secret is a stint as a rhythm guitarist and violinist in a science nerd rock band in her college days.

Talbot is also a photographer and her book Schubert’s Winterreise: A Winter Journey in Poetry, Image, and Song (UW Press, 2003), won a Best of the Best from University Presses, from the American Library Association. Her portrait work has appeared in the New York Times, and has been used by the Metropolitan Opera, the Santa Fe Opera, the Boston Symphony, the San Francisco Opera, and many other music organizations. She currently lives in Madison, Wisconsin.

A review of St. Cecilia’s Daze appeared in issue #105 of Verse Wisconsin. Talbot has been nominated for a 2010 Pushcart Prize.