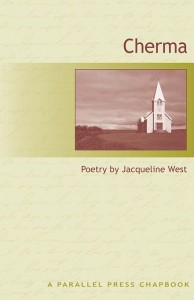 Jacqueline West’s poetry has appeared in journals including St. Ann’s Review, Inkwell Journal, Pebble Lake Review, The Pedestal Magazine, Barnwood, and Briar Cliff Review, and has twice been nominated for a Pushcart Prize. Her series for young readers, The Books of Elsewhere (Dial), debuted in summer 2010. She lives with her husband in Red Wing, Minnesota.

West uses pictorial language, helping us into the settlers’ experiences: “waiting roots shriveled like finger bones” “the silent curve of her spine / rolling down toward the floor like a broken hill.” She never intrudes herself into the stories, making sure not to break the illusions of this world she has created. Anyone who enjoys novels, history and/or the intersection of these two in historical fiction would enjoy these lovely poems. I was reminded especially of Louise Erdrich.

By weaving fragile imagery into the stark tones of these narrative poems, West reveals a multitude of vulnerabilities hidden below her characters’ steely resolves. Her careful attention to nuanced detail elevates specific events to universal experience and underscores the gains and losses of a people who have sacrificed much for their admission into American society.

An engrossing speculation into the ordinary lives of rural Americans, highly recommended to anyone who loves fine poetry.
– Midwest Book Review

After all those Sunday dinners
Grandma would heave her chair
back from the table,
set her napkin delicately
on the untouched fork
beside the plate heaped high
with skin and scraps
and explain to the gathered family:
“It looks like I ate a lof of shicken,
but it was really all bones.”