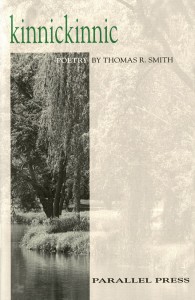 In his recent review of Thomas R. Smith’s chapbook Kinnickinnic for Verse Wisconsin, B.J. Best writes that Smith “imbues the natural world with both power and mortality, and we, as denizens within it, are wise to consider its lessons.”

Thomas R. Smith is a poet, essayist, editor, and teacher living in River Falls, Wisconsin. His writing has appeared in hundreds of journals in the United States and abroad. His work was selected for The Best American Poetry 1999 (Scribner) and has reached large national audiences on Garrison Keillor’s public radio show,“Writer’s Almanac,” and in U.S. Poet Laureate Ted Kooser’s syndicated newspaper column, “American Life in Poetry.” He is the author of five books of poems: Keeping the Star (New Rivers Press, 1988), Horse of Earth (Holy Cow! Press, 1994), The Dark Indigo Current (Holy Cow! Press, 2000), Winter Hours (Red Dragonfly Press, 2005), and Waking Before Dawn (Red Dragonfly Press, 2007). He has edited Walking Swiftly: Writings and Images on the Occasion of Robert Bly’s 65th Birthday (Ally Press, 1992; HarperCollins, 1993), and What Happened When He Went to the Store for Bread (Nineties Press, 1993), a selection of the Canadian poet Alden Nowlan. He is currently a Master Track poetry instructor at the Loft Literary Center in Minneapolis.

This time of year the air fills with stars,
the warm wind pushing them upstream
against the river’s fast glimmer.

From their radiant swarm, one can sometimes
pluck a tuft so insubstantial
it’s difficult to pinch the gossamer

wings back from flight. The seed, white inside
its silver aura, sails the light’s current
to arrive at a darkness it needs.

We might imagine it there, planted,
growing an angel instead of a thick-
barked, deep-rooted cottonwood tree.