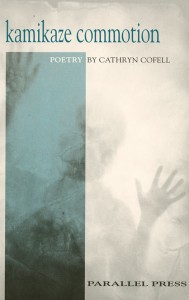 Cathryn’s work can be found in Prairie Schooner, Laurel Review, Phoebe, MARGIE, Slipstream, Nerve Cowboy, and many others. She is the recipient of two Pushcart Prize nominations, the Jade Ring, and the Wisconsin Academy of Sciences, Arts and Letters Outstanding Poem award for two consecutive years. She has four previous chapbooks: Her Religion, from Hodge Podge Press; Tiny Little Crushes, from Lockout Press; Roadkill, through the Neville Public Museum; and Sweet Curdle, from Marsh River Editions. Cathryn is a passionate advocate for the arts, having served as an advisor to the governor of Wisconsin for the creation of a state poet laureate, as founding chair of the Wisconsin Poet Laureate Commission, on the board of the Wisconsin Fellowship of Poets, and as a proarts voice wherever she’ll be heard. She is a frequent keynote speaker, workshop facilitator, and guest poet at venues throughout Wisconsin, but calls Appleton home.

until a million thrumming wings
beat a symphony in every pore
and we pulsed inside out
fluorescent from forfeit.

Giving in was giving up but
it was right before the end
that light that brilliant light.