Stones in Our Pockets: Art and the Art of Medicine 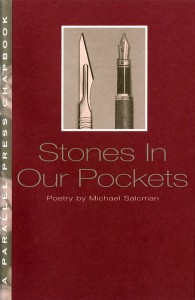 Michael Salcman is a physician, brain scientist, and essayist on the visual arts. He was chairman of neurosurgery at the University of Maryland and president of the Contemporary Museum in Baltimore. Recent poems appear in the Ontario Review, Harvard Review, Raritan, Notre Dame Review, River Styx, and New York Quarterly. His work has been heard on NPR’s All Things Considered, and in Euphoria, a documentary on the brain and creativity (2005). He is the author of six medical textbooks and three previous chapbooks of poems. His first collection, The Clock Made of Confetti, was published by Orchises Press in 2007.

Later, in our yearbook, they caption a photo of George,
his mouth gaping open as if to say
‘we’re going to carry what up from where?’
that first day of class two or three of us at a time lift
bodies onto a fireman’s stretcher, and carry the corpses
out of a late nineteenth-century red brick Victorian
across a small courtyard and up a short flight of stairs
into the anatomy lab next door. The dead weigh more
than we do, fresh from the ice house they’re heavier still;
hands at their sides, standing attention in repose,
their clay-colored faces flat as cardboard, eyes closed
lips pursed, holding in the separate secrets
of their final moments, the fleeing of their souls.
Because of a shortage in donations, it’s four to a body.
Over the next weeks and months, nerves and tendons
come up to greet the ministrations of our knives.
We give them names before we flay (in order)
their extremities, belly, heart and head, and leave nothing
much behind except attachments to bone, the black
tongue and the brain in its casement. Not all of us
are equally deft–you can already tell who the future
surgeons are and who the psychoanalysts. We make
the usual jokes about girls who study late and fall asleep
over the bodies, but in general these dead get a modicum
of respect not accorded them in life.
They’re the first people we learn to read like books,
exemplars of the future and texts off the street.