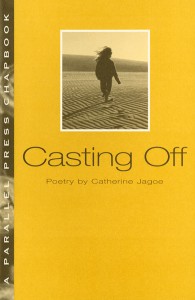 Catherine Jagoe was born in Britain and moved to the United States in 1986. She works as a translator and interpreter. Her translations include the Amnesty International award-winning Argentine novel My Name Is Light, published by Bloomsbury UK/US in 2003. She has translated numerous other works of fiction and nonfiction and is the author and coauthor of two books on Spanish literature and culture. She is a member of Lake Effect, a group of poets in Madison, Wisconsin. Her poetry has appeared in Rattle, Kalliope, Wisconsin Academy Review, Poem, Red Wheelbarrow, and other journals. She lives with her husband and son.

I took a quiet road that afternoon,
a weekend city cyclist meandering
along the river’s course through corn and soyfields,
pastures, woodland, hills, and on the way

I came across a woman standing alone
in the concrete forecourt of a small town bar,
clad neck to toe in tent-like royal blue polyester,
her face alight with happiness,
waving at the stout, retreating backs
of a wedding party being borne away,
full of hilarity, on a hay wagon,
bride and groom standing up front
behind a tractor belching diesel fumes,

leaving the woman looking proudly after them,
she who had probably looked after them
all their lives, her folk
motoring off in the sun to the future.

They took my route and there was no turning back
so I kept pedaling slowly on behind them
in the wake of laughter fizzing bright and guileless
as champagne. The tractor chugged deafeningly along,
deceptively slow like the river, pulling them home
in their tuxedos and bright dresses,
jocular, elated, heedless, unabashed.