The Discovery of Heaven 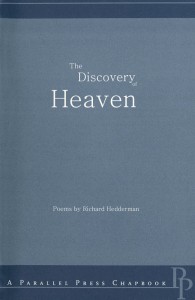 Richard Hedderman is a poet, freelance writer, and museum educator. He is a graduate of the University of San Francisco’s English and theatre programs and earned a master’s in creative writing at the University of New Hampshire. A three-time Poetry Fellow at the New York State Writers’ Institute under the directorship of Irish poet John Montague, his poems have appeared in numerous national and international publications including Chautauqua Literary Journal, South Dakota Review, CutBank, Stolen Island Review, Puckerbrush Review and the Welsh language literary journal Skald. He has read his poems for the “Poetry at Noon” series at the Library of Congress and his work has been collected in the anthology In a Fine Frenzy: Poets Respond to Shakespeare (University of Iowa Press, 2005). In addition to writing, Richard is a lecturer at the University of Wisconsin-Milwaukee and a member of the Society of American Fight Directors, teaching and choreographing stage combat for professional theaters and universities nationwide. He plies his craft with pen and sword from his home base of Milwaukee, Wisconsin.

Sometime, just watch the sky-map
of clouds drift over the trees
or down the length of a pond.
How easily the sky gathers its terrain
crossed by valleys and roads.

Watch carefully for the countries:
A map of Japan or a Norse land,
its chilly borders shaded with firs,
its earth churned by a flying horse.

Yesterday, I lay back
against the forest floor
and watched as they billowed past,
those water-colored galleons
of the east, their sails dragging.

They made the aspens rattle,
the quaking leaves remembered
their passing,
and I knew then what it was
to stretch out in silk, in umber.