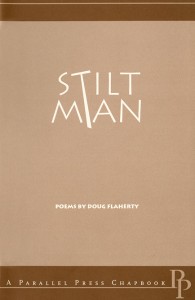 Doug Flaherty has published poetry in numerous magazines including The New Yorker, The Nation, North American Review, Beloit Poetry Journal, Poetry Northwest, and the Harvard Review. He has published four full-length books, six chapbooks, and has been represented in ten anthologies. Flaherty has read at thirty universities in the United States plus the University of Mexico and the Peacock Theatre (experimental branch of the Abbey Theatre, Dublin, Ireland). The poet received the MFA from the Writers Workshop, University of Iowa, and taught modern American literature and poetry writing for thirty-five years at the University of Wisconsin Oshkosh.

On most Mondays, coming off an eclectic
week-end, I turn esoteric. By mid-week, say
around two p.m. on Wednesday, the orientation
is clearly eccentric with tangy hues of modernity.
Who says fun with language dies after grade three?
Let that person go to the blackboard and write
I am a dumb schmuck four hundred times in
forty point italic New Times Roman. I mention
script, because poets should keep current on how
their work appears on the page, the web, the side of a bus-
prettier than hen scratches or pock marks left
on bar tops by over-wrought dice shakers. So much
depends on chickens and wheelbarrows and rain slicks.
So much depends on mental ambience when wording.
Getting moody is the prime occupation of the poet.
Sulk like a slinky descending a staircase. Whoop
like a whoopy cushion at the established order.
Be as ballsy as the steamy scenes in Deuteronomy.
Pare the nails, sit back like a chilled green bottle.
When the mood kicks in like one of the Pleiades stroking
your cheek with her blowsy wings, the words appear
like the cryptic messages floating up from the 8 ball
that says yes, maybe, no, sometimes, forget it. Sometimes,
but not as often as desired, the words froth-up like verbena
in the troubled interstices between synapses. I intuit that
it is a simulacrum with you, as well. But should you fail
to grasp the internal linkage, I report what a five year
old girl from Fond du Lac confessed to me last month:
When I grow up, I want to be hatched from an egg.