Short Story and Other Short Stories 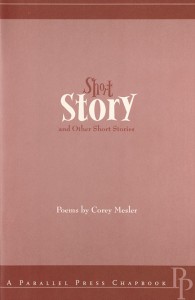 Corey Mesler has published poetry and fiction in numerous journals including Pindeldyboz, Orchid, Thema, Mars Hill Review, Poet Lore, and others. He currently has four chapbooks available. A short story was chosen for New Stories from the South: The Year’s Best, (Algonquin Books, 2002). His first novel, Talk: A Novel in Dialogue appeared in 2002 and his recent novel, We are Billion-Year-Old Carbon, was published in 2005. He has also been a book reviewer for The Memphis Commercial Appeal and The Memphis Flyer. With his wife he owns Burke’s Book Store in Memphis, one of the country’s oldest (1875) independent bookstores. Most important, he is Toby and Chloe’s dad and Cheryl’s husband.

Ringo’s singing “Act Naturally.” The tea kettle is so close to
screaming that time stands still. Randy is motionless in the middle
of his crappy apartment staring at a TV with the sound turned off.
There’s a woman on the screen in a bikini and a bunch of college
jock types standing around her, ogling. Randy feels like an alien
on his own planet, the planet Earth. Suddenly he hears the music,
The Beatles. And just as suddenly the water temperature reaches a
musical crescendo. Life is all around. Randy shudders like a wet dog.
Sometimes you lose your place and sometimes you pop right back in.