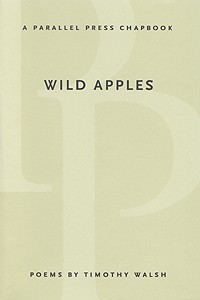 “That is the way of apples, always reverting/to wilder strains, no two entirely alike,/since apples are, like us, not true to seed.” Timothy Walsh relishes the unpredictable originality of wild apples. While their orchard cousins are grafted, pruned, conformed to bear a predetermined crop, uncultivated trees constantly reinvent themselves in “strange new fruit” more gnarly than shapely, more tangy than sweet, more startling than familiar. Walsh celebrates and seeks “the unknown in apples [that] sleeps within.” He would set loose those seeds not only in apples but in himself. His physical and spiritual muscles seem to flex in tandem as he makes connection through canoeing, hiking, sailing, skating, kayaking, gardening, fishing with “a quivering something too deep/for ears, a low blood-pulse/of earth, of sky.” This immersion in sensuous awareness, “listen[ing] for the underside of silence,” is both free-flowing and highly conscious. Walsh is careful not to act as orchard-keeper, grafting convention’s crop onto the reaching branch of perception. His aim as participant, observer, chronicler is to discover how the wild apple element in life expresses itself “in something/more self-organized, [in] patterns as arresting/as an oak or iris or star-flecked sky.” With a rich imagery of gathering, harvesting, weaving, catching (as distinct from originating or creating), Walsh illustrates his sense of poetic husbandry. He would gather words like choice grapes and savor their fine wine. He casts for them like a skillful fisherman who “sense[s] what watche[s] from shadows.” Out of the clutter and commotion of experience, he would craft poems as sturdy and natural as willow baskets, “small thing[s] of integrity,” “a woven web whose worth/is partly in itself and partly in what it will carry.” What his poems carry are a singing beauty, a large aliveness, a graceful ease with wildness within and without. Walsh invites us to savor a full cup of “strange dark ciders,” to wander with him through thickets where small and twisted fruits “hang in thousands.” “Together we shall know/words as wild apples,/poems as flowering crabs” and, perhaps, wilder, freer visions of our lives.

Timothy Walsh grew up in New Jersey, but he has lived in Madison, Wisconsin, for the past twenty years. When he is not writing, he spends a lot of time on the water, sailing, canoeing, and kayaking. His poems and short stories have appeared in many publications, including The Midwest Quarterly, Soundings East, Rivendell, Wisconsin Academy Review, Chiron Review, Free Verse, and West Wind Review. Walsh won the “Grand Prize” in the 2004 Atlanta Review International Poetry Competition and was a finalist for the Ann Stafford Poetry Prize. Two of his short stories have been nominated for Pushcart Prizes.

Walsh has a B.A. from Boston College and a Ph.D. from the University of Wisconsin-Madison. His book of literary criticism,The Dark Matter of Words: Absence, Unknowing, and Emptiness in Literature, was published in l998 by Southern Illinois University Press. He is currently the Director of the Cross-College Advising Service at UW-Madison.

The Marsh in Winter

If you stand and listen,
you will hear the voice.
Reeds sharp as rapiers rasp the wind.
Frost creaks in the trees.
Sunlight, ice-bright, falls from the sky.
Scattered cedars and junipers loom like shadows.
Sheathed in ice, a willow droops heavily
across the path.
Driven snow packs the creviced bark of cottonwoods.
Once-hidden bird nests now plainly marked
by a white cap of snow. . . .

Out on the marsh, blue water shows through shifting ice.
Tall brown reeds, slim as dancers, bend in the breeze.
A hundred thousand cattails, each one lit
by the low-angled light of a westering sun,
each brown seed head blazing
like the head of a saint.