Virgins on the Rocks 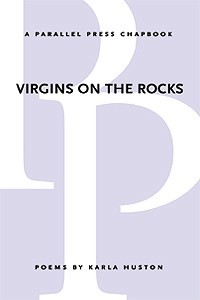 “To truly laugh, you must be able to take your pain and play with it.” (Charlie Chaplin) Karla Huston excels at such Chaplin-esque play. Quirky juxtapositions, out-of-context encounters and witty word play abound in Huston’s poems, as she weighs the cosmic explosion of galaxies against Hollywood’s version of stardom and coaches a dead friend in how to make “divinity” (not spiritual life, but the white fluffy fudge served at tea parties). Huston is very much concerned with fundamental human dilemmas, issues so large they can sound grandiose if approached head-on. So she plays with them (and with us), buoying us with lightness to better bear life’s weight. In her poems we encounter venerable figures from art, literature and religion, as well as talking body parts, all delightfully tweaked to afford fresh views. Lot’s wife never permitted the dignity of a name, as if she wasn’t worth her salt. The wicked witch of the Wizard of Oz, keeping alive in us the hope that a well-aimed bucket of water might send our demons into melt-down. Greek gods Hera and Zeus musing on their “top ten lists of dream lovers” (she lusts after Kerouac and Rhett Butler, he for Emily Dickinson, Cleopatra and Cher) as they argue violently over sexual dominance. And a “half a cup” breast bemoaning her journey from the groping hands of eager boys to those of technicians, searching for lumps. Huston plays these slices of life comically, but her distress over their tangled riddles is deeply felt. She writes of “contradictory comfort” and “careful communions,” phrases which could well describe the thrust of her poems, that hard-to-hold balance of constantly stretching toward elusive resolution. In a marvelously surreal, nearly hyperventilating attempt to converse with a dead (by suicide?) friend, her efforts to console with bright talk of dreams, weather, and cooking tips finally collapse beneath the weight of her own desolation. “I should mention, though I don’t think where you are,/you’ll need this information, but egg whites/won’t set up when the sun doesn’t shine./…Of course/none of this means anything if I can’t remember/the way your head flew back when you laughed.” It’s very much to Huston’s credit that we will definitely remember rearing back in laughter as we read her poems, even as we feel that little scratch of disquiet as we swallow her words.

Winner of the 2003 Main Street Rag Chapbook contest, Karla Huston recently earned an MA in English/Creative Writing from the University of Wisconsin-Oshkosh. In addition to winning the Wisconsin Regional Writer’s Association Jade Ring for both poetry and fiction, she has received writing residencies from the Ragdale Foundation in both 1998 and 2002. Her poems have earned five Pushcart nominations. She has published poetry, reviews and interviews in many national journals including Cimarron Review, 5 A.M., Margie, North American Review, One Trick Pony, Pearl, Poet Lore, Rattle and others. Another chapbook, Catch and Release, is forthcoming from Marsh River Editions.

Huston is a former board member of the Fox Valley Writing Project, and a former membership chair and regional vice-president of the Wisconsin Fellowship of Poets. She teaches creative writing and contemporary literature at Neenah High School.

David’s making a mandolin for art class,
and I’m amazed by his patience, his progress,
how he’s sanded the oak neck smooth,

how he’s tapered the mahogany board
to curve and turn. Each day he adds something:
nickel frets, brass and ivory pegs.

Why mandolin I ask? It’s smaller
than a guitar, he says, and easier,
and I think, yes, and a tone even more sweet.

I ask him about the sound box-
how he will make it round,
and how he will get the f holes to curl.

I can’t help but wonder, when the instrument
is finally finished, what songs
will he’ll make with it,

and what lucky girl will be the first to hear
the strings sing, belly vibrating
with the music of this kind of love?