The Heart of War 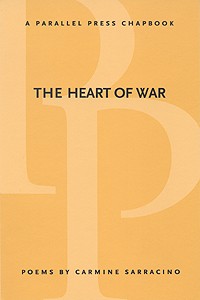 In energetic and vivid poems, Carmine Sarracino pursues the sad saga of war — excitement and flag-waving yielding to drudgery and death, terror and horror laying siege to courage and high purpose. Although set in the Civil War, the story Sarracino tells is not so much about Yankees and Confederates as about individual human beings, whatever their loyalties or geography, reeling under war’s impartial and unforgiving impact. The eager preparations: “Fishing mates, pranksters, hunting pards./Enlisting together, boarding trains together…/Swearing great oaths. Posing for ambrotypes./Goosing one another with the muzzles of rifles./Sharing canteens, blanketrolls, last hardtack crackers.” And the aftermath: “Bodies, no heads./Legs, no bodies. Heads./A solitary heap of insides here.” “Oh, destruction is the miracle/of creation turned on its head./Not all the king’s men/could put together again…” Sarracino’s language is clear and direct. His poems draw the reader into scenes that are generously detailed and authentic. Their immediacy is given further dimension by the introduction of personalities real and invented, through whom we feel the dragging psychological cost of war. Sarracino is particularly skilled in the subtleties of ironic juxtaposition. Soldiers mock the torment of lice by featuring them in clever entertainments, yet the lice finally mock the war itself, illustrating with their indefatigable pervasiveness the utter hopelessness of the fight. The faithful knitting of socks to outfit soldiers is rendered futile as “the perfect architecture of the foot…/so beautifully knitted – drop[s]/beside the surgeon’s table.” And a photographer prowls a field of corpses, “his camera like a weapon shouldered.” He shoots again those already shot, his aim to win the commercial battle among “scrabbling, backstabbing/editors bidding/for timely images of The War.” Why, Sarracino asks, do such stories capture our attention? Perhaps, he concludes, because most of us find ourselves on the front lines of harsh experiences at various times in our lives. Perhaps revisiting actual battlefields allows us to touch the secrets of courage and sacrifice. After all, “Haven’t you been marched/toward what you could not bear?/…You know, then, don’t you,/what hallows this ground?”

Carmine Sarracino was born in Providence, Rhode Island and grew up in the community of Italian immigrants on Federal Hill. After attending Rhode Island College and the University of Michigan, he spent much time in South Asia on research grants, including two Fulbright Fellowships. A specialist in the poetry of Walt Whitman and nineteenth century American literature, his lifelong interest in the Civil War led to this collection of poems, many of which have appeared in Prairie Schooner, The Laurel Review, The Beloit Poetry Journal, War in Literature and the Arts, and elsewhere.

His first book of poetry, The Idea of the Ordinary, was published in December, 2002, by Orchises Press. He is a Professor of English at Elizabethtown College, in Elizabethtown, Pennsylvania.

They might have freighted drygoods-
blouses and trousers, spools of bright
gingham- from ports to upriver towns.
But these days they carry farmboys, mostly.
Like this load of New Yorkers in stacked
white hammocks stained red, none of whom
ever before traveled 20 miles from home.

Under a crescent moon the ships
churn into Baltimore harbor, slowly rocking,
creaking, so that many of the boys, dreamy
with anodynes, smile into their mothers’ faces.

Some will be delivered dead. Others
missing the legs, hands, feet and arms dropped
beside the surgeons’ tables for burial in pits.
Many expected to heal in days will die.

Soiled gauze must be removed, slough washed off,
fresh lint and bandage reapplied. The boys will need
someone to write a letter, read the Bible, someone
to return the next day, and promise to return again.

This time of night in Baltimore
whorehouses and bar rooms ring with revelry
(the good citizens tucked long since abed)
as these ships steam in from Chancellorsville.

At the end of Wharf 6, in the dark,
a sack of oranges at his feet,
Walt Whitman stands waiting.