Singing to the Garden 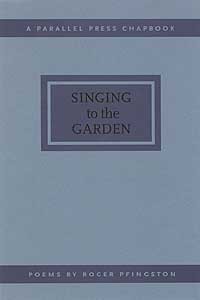 On a solitary, early morning visit to his vegetable garden, a man unexpectedly, “…began to weep for no reason [he] could think of, and then for all the reasons [he] could think of.” Later, over breakfast, his wife asked about the singing she had heard echoing from the garden. “‘Singing?’ [he] asked.”

Exploring both the rich ripeness of life and its disquieting decay, Pfingston’s poems might be said to simultaneously sing and weep. Their singing is whimsical, imaginative, edged with laughter. Their sorrow is not wrenching but quietly attentive, acknowledging diminishment without despair.

A roundly pregnant and smiling woman, young boys “scared ecstatic” by a daredevil adventure, a startling abundance of condoms clogging a septic system – this is life in “joyful measure” that finds Pfingston “grinning/with gratitude.” Then the poet “walks out of one story/and into another” to detail the “offensive flesh” and stink of a dead possum, the discovery of an elderly neighbor sprawled dead in her entry hall, and the mind-numbing deterioration of a veteran-amputee turned farmer-drudge. Pfingston’s descriptions are highly sensuous, filled with imagery that invites the reader to join him in smelling, hearing, touching, to be awash with awareness in the midst of common experience.

An “ordinary man,” spending an ordinary moment sitting on his porch, enjoys the breeze and the lush growth of his garden while contemplating how the arrangements for his death might “do/the least harm.” “Before going into the house he leaned/forward and spoke his name aloud,/addressing the backyard as though his voice/might carve the silence in some memorable way.” Carving out in poems his perceptions of the singing/sorrowing ordinary, Pfingston has spoken memorably.

A retired teacher of English and photography, Roger Pfingston published some of his first poems in the New York Timeswhile still in the navy in the early ’60s. Since that time his work has appeared in a wide range of magazines and anthologies as well as ten chapbooks and one full-length collection. He is the recipient of a poetry fellowship from the National Endowment for the Arts and two PEN Syndicated Fiction Awards.

He sat for a while on the back porch
finishing his coffee, letting the breeze
pleasure his skin like the hands
of a woman holding his face.
The birdfeeder that he’d filled only
yesterday hung empty in the maple,
seed scattered bright as jewels
in the dark mulch of the flower garden,
the work of a clever raccoon. He laughed,
marveling at such enterprise, then placed
the pad of paper on his knee and began,
“Scatter my ashes where they will do
the least harm….” The cat in the tree
jumped from a low limb and landed
in a palette of poppies and daylilies,
his wife’s perennial gift.
At the far end of the septic field
seepage glistened in the tall grass,
a watery sludge feeding a green
worth singing about, a lush growth
of back-lit blades in the morning sun.
Before going into the house he leaned
forward and spoke his name aloud,
addressing the backyard as though his voice
might carve the silence in some memorable way.