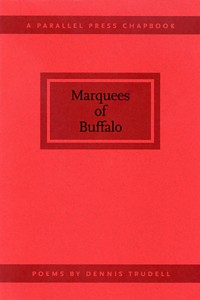 “Me was movies…/Married or divorced – Saturday night,/I’m there like a church…./Lights would dim,/then come on inside me.” Trudell’s richly imaginative poems explore how the “shifting, bluish, magical beam” of a projector sends its “narrowing dust-glints through…heart[s]….” They propose plots, reenact roles, set scenes, celebrate movie moments. They are colorful and subtle, enticing the reader with memorable stories and characters. Trudell seems fascinated by the curious, almost symbiotic relationship between movies and moviegoers. On the one hand, he recounts experiences at the movies; on the other, he illustrates how movies become our experiences as film images are replayed (relived) in thought and memory. Thus we assimilate vibrant moments in movies as high points in our lives. “Her long thighs/sent percussion-beats through calves/and shoes to floors – which sent them/toward me, grinning at videotape/sixty years later…./She danced like Mother/almost laughed sometimes: like I/breathe in the act of love.” Whether the companionship of such images is real or vicarious, their comfort can seem solidly tangible. “My father gets up in the middle of the night/to watch an old movie on cable television -/because he can’t sleep. He has done this before./He will do it again/…He lives alone./Because my mother died…and sometimes he looks/at her absence on the black sofa…./The movie has a name,/but he doesn’t know it…./My father returns/to bed and goes to sleep. Or does not…” Trudell repeatedly reveals for us a truth we know but may not have realized so fully before: movies may not be “real life,” yet their impress on our lives can be as real as it gets.

Dennis Trudell grew up in Buffalo, New York. A retired professor of English from the University of Wisconsin-Whitewater, he received his B.A. from Denison University and his M.A. and M.F.A. from the University of Iowa. Trudell’s poems have been published in many literary journals, chapbooks, and anthologies. His story “Gook” was chosen for an O. Henry Prize volume. Trudell has won fellowships from the National Endowment for the Arts and the Wisconsin Arts Board. In 1996, the University of Wisconsin Press published Fragments in Us: Recent & Earlier Poems, for which he won the Felix Pollak Prize in Poetry. In 1996, Trudell also published Full Court: A Literary Anthology of Basketball, (Breakaway Books). A collection of stories, Vast, Brief Days and Nights, is currently under submission. Trudell lives in Madison, Wisconsin, with his wife Dee.

I blew a date with Lynda Hopkins
at The Lafayette in downtown Buffalo,
circa 1955. The Eddie Duchin Story
ended with the pianist and son
at a two-keyboard grand piano-
we’d known that he was ailing.
Then only the son and “The End”
. . . . And Lynda wiped her eyes,
the other girl on the double-date
wiped, and I said: “He’s under
the piano”-and no one laughed.
Or my friend did, then stopped.
And Lynda never loved me. She
had a stepfather, I now remember.
She didn’t love me in third grade
when the teacher intercepted Ken’s
and my love notes, and read them
to the class. Didn’t as I climbed
that summer night in high school
onto her neighbor’s garage roof,
tossed pebbles at her bedroom window,
afraid of the stepfather, who drank.
Once I saw him with a .45 . . . .
cleaning it? I don’t know-he
drank. She didn’t love me. Didn’t
laugh, and wouldn’t if I could
somehow make her hear me now
say, “Remember The Eddie Duchin
Story . . . Tyrone Power disappearing
from that piano at the end to show
he’d died, his son played on . . . .
my joke: ‘He’s under the piano’
at The Lafayette in downtown Buffalo?”
She wouldn’t remember. Nor wipe
her nearly sixty-year-old eyes
if I added, “Ken went there-
We’re all going under the piano.
I won’t see you there. You were
right to cry. I was right to joke.”