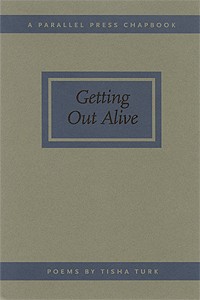 After months of grappling with life-threatening illness, Tisha Turk emerged into a new/old life. The understated, resonant poems of “Getting Out Alive” trace this experience. With delicate but exacting penetration, they evoke the disorientation of watching one’s own life become diminished, even ethereal. The diagnosis of a brain tumor reverberates in Turk as a sensation of being helplessly marooned. “They’ve discovered a new island, one/we never wanted, and I’m stranded there,/kneeling on the sand at ebb tide,/trying to patch a rudderless boat.” Ultimately, stripped to essentials, Turk’s concern is as much for the integrity of her selfhood as for the wholeness of her body. “The body’s padlock has been picked. What’s left/to keep secret?…/I am afraid the surgeon’s key unlocks/an empty room: the ordinary self/is gone,…”

But surgery is successful. Having survived “going under” (as the first section of the chapbook is titled), Turk must find renewed energy for “going on.” She washes her windows because she wants to see clearly; she patches a quilt because she does not want things to fall apart. Even the humble but hardy root vegetables she stores in cellar and attic offer a parable of endurance. “I want/what lasts through the long winter.” Onions, carrots, potatoes, sunchokes, “they’ll come through/one way or another.” “These roots have their own voices.”,…/These days I’ll listen/to anything that knows how to breathe/underground, anything that digs deep/and holds on.” So is what Turk reveals well worth hearing and holding onto.

Tisha Turk teaches English and Women’s Studies at the University of Wisconsin-Madison, where she is a Ph.D. candidate. When she’s avoiding her dissertation, which is most of the time, she cooks elaborate dinners for her friends, entertains her cats, over-analyzes cult TV shows, and writes nonfiction as well as poetry. Getting Out Alive is her first collection.

The phrase is a promise: no memory,
no pain. But how much further under
can I go? I’ve been submerged
for months, drowning in late-night calls
about what we love most, what we’d miss,
slipping into a stream of solemn conversation
like the needle slips into the vein.
I want to believe that afterwards
I’ll float to the surface. That’s where
I want to live now: I want to worry
about next month’s rent, whether the milk
has turned, what time the bus stops running.
I want small obligations, something lighter
than love or the body’s sinking bones.