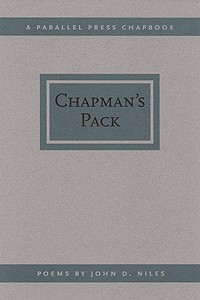 “One tall gold ship of fact sets sail/on seven boisterous seas of possibility.” So John Niles launches the reader on an enchanted exploration of storytelling’s clever art and wise mysteries. In the venerable tradition of chapmen (itinerant peddlers) who hawked songs, stories and small things of value from door to door, Niles displays a full pack of intriguing wares. Riddles and fancies are amply offered along with a generous glimpse of the great archetypal Storyteller herself, gathering her wool from “a lamb that has never been born,” seasoning it “with sex and salt,” spinning it on a wheel “cobbled together by imps.” “With a single thread of yarn/she pulls in a skein of listeners.” “She pulls the wool over your eyes/so you begin to see.” Niles simultaneously casts and reveals the spell of story, paying homage to its enthralling magic, evoking and fulfilling the reader’s eager expectation. His poems are brightly original and energizing. They simmer with a delightful playfulness even as they seek out the beauty beneath the too-familiar. Which is the true story, Niles seems to ask, the prosaic, literal fact (“Woke up as usual./Drove the kids to school/and took the dogs for a walk.”) or the richly layered nuance that “captures each hue of light”? Lending the Storyteller our ear, we may hear a larger tale of our own lives and remember how much we “still delight in her company,/the way she spins the threads of thought/into a refulgent fabric,/transforming all things/into one text, one testament of life.”

John D. Niles was born in St. Louis, Missouri, and has lived most of his life in the San Francisco Bay area. He joined the Department of English at the University of Wisconsin-Madison in 2001 after teaching for many years at the University of California, Berkeley. He is known for his writings on Beowulf and other examples of Old English literature, and he has also undertaken research into traditional singing and storytelling, particularly among the traveling people of Scotland. Although he has published translations of poetry, this is his first collection of original verse.

Sooner or later one comes back
to the simplest things:
pinewood fire
bread and a friend to break it with
a forest watched by stars.

Fire, forest, friend-
as you pronounce each word, for a moment you become it.
And all your scaffoldings of thought,
your glittering ambitions-

how quickly they become small,
smaller than the stars’ tiny holes of light,
smaller than a single spark that flies into the darkness,
until at last they are so small
they have become
nothing at
all.