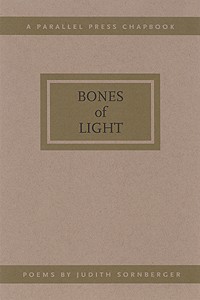 Judith Sornberger writes that her ultimate aspiration is to “join the herd of bones,/add my light to theirs…” “I want to take my tongue along/their contours, reinvent their glisten,/tickling the smooth secrets of sockets.” The contours traced in Sornberger’s poems include family ties, sexuality, war, ineffectual faith, violation, love of place, death. These elemental bones of experience do indeed glisten under Sornberger’s tongue, grinning with wonder and sensual delight, aching with unanswered questions and loss. Sornberger draws word-images so effectively that the reader looks over her shoulder at living scenes. Then she steps back to “tickl{e) the…sockets,” to caressingly consider the secrets of our joinings to relationship, gender, place, history and meaning. Thus we watch as the “ordinary bodies” of parents become seductively fluid on the dance floor, prompting their offspring to recognize, “there’s something they have/yet to tell us.” We hear a child say her prayers at length every night. “Everything, even the stars, needed my blessing.” Until eventually “I was grown…/And I knew how not to pray.” Then one night’s news carries images of war and “a broken face I can’t stand to see,” and a spiritual nerve is struck. “Of one thing I am certain:/this man suffers for our sins-…/There must be…/some cure/for how we lay us down, for how we sleep.” Sornberger acknowledges the perplexing contradiction of life’s vigor and fragility. Yet she stops at any sighting of hope, which can unexpectedly arrest us like a brilliantly colored bird in flight. “…you fear you won’t see it,/that it’s flitted away like too many wishes.” But wait and watch; it’s “reappearing now/and now and now until it seems/there is no end to hoping.” Such resilience is the glisten in Sornberger’s “Bones of Light.”

A native of Nebraska, Judith Sornberger is a descendant of Irish cattle ranchers and Swedish farmers. She has a Ph.D. in English from the University of Nebraska-Lincoln. Sornberger’s book of poems, Open Heart, was published by Calyx Books in 1993. Her chapbook Judith Beheading Holfernes, won the 1993 Talent House Press chapbook contest and was published by that press, as was a subsequent chapbook, Bifocals Barbie: A Midlife Pantheon (1996). Her poems and essays regularly appear in journals such as Prairie Schooner, Puerto del Sol, West Branch, and Calyx. She has taught in a wide variety of venues. Her first teaching experience was in a Nebraska prison, where she taught poetry and other writing courses. Sornberger is currently a professor in English and Women’s Studies at Mansfield University of Pennsylvania in the northern-most tier of the Appalachians. She is the mother of adult twin sons, and is married to writer Bruce Barton.

I’ve never looked so long
at the underside of a thing,
never had that luxury-
that soaring above me in a circle
as if my eyes were prey
or its beloved.
Never held to my eyes
lenses for marks that tell
one species from another,
never knew anything without a doubt:
the white windows on wings,
the slivered, white cross of the body,
the dark V where the legs are
soldered on-a positive i.d.:
ferruginous hawk.

So different from the red-tailed
whose name lies as often
as it tells the truth.
Sometimes hawks don’t follow
the rules of our books.
The rule of my heart is to love
before I can identify the source.
It’s a risk like prairie dogs
standing in full relief against
the blue October, the risk they take
by living in the open.

I’ve come here to learn to tell
one love from another, to locate
the muscles of vision, the tight
enough squint, to find the patience.
Is it patience or hypnosis
that holds the prairie dog
to the hawk’s circle, the hawk’s
naming the rodent in its slow
language of ever smaller circles: prey
prey
prey