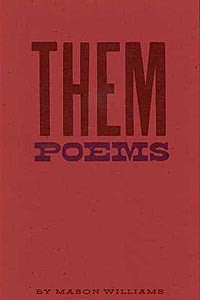 Written during the 1960s, Williams’s Them Poems were so widely diffused into folk culture that they are often presumed to be another product of that prolific author “anonymous.” Here they are for the first time collected and selected by their creator, Mason Williams. Them Poems is a bold, brassy collection that captures the free and easy antics of the 1960s. Smart, rhythmic stanzas have readers snickering through each knee-slapping stanza.

Mason Williams is perhaps most widely known as a composer and musician. He has recorded more than a dozen albums, including the single Classical Gas which won three Grammys in 1968. Twenty years later a single, Country Idyll, from his albumClassical Gas was nominated for a Grammy. The album went gold by selling over 500 thousand copies. In addition to his pop concerts, his Of Time & the River Flowing, Symphonic Bluegrass and Christmas conerts have been performed by more than forty symphony orchestras.

Mr. Williams has written over a dozen books of prose, poetry, and music includingThe Mason Williams Reading Matter and Flavors (Doubleday), The Mason Williams FCC Rapport (Liverite), and a music book Classical Gas — The Music of Mason Williams (CPP Belwin). As a comedy writer, he was a prime creative force in CBS television’s controversial Smothers Brothers Comedy Hour and in 1980 he was the head comedy writer for NBC’s Saturday Night Live.

How about Them Yodel Yellers,
Can’t they pierce?
Up in them mountains,
Hollerin’ so fierce.

Look at Them Yodel Yellers,
Ain’t they vogue?
Hittin’ them high notes,
Yellin’ that yode.

Them golden-throated Yodel Yellers,
Ain’t they loud?
Rollin’ that yodelin’,
Up in them clouds.

How to be a Yodel Yeller?
Here’s the sum and total.
Get upon a mountain,
Beller out a yodel!