The Friends of UW-Madison Libraries will bring Dr. Benjamin to campus virtually on April 8 at 4PM CDT. She and Dr. Monica M. White will tackle the vexing issues raised in the book. Dr. Cheryl Gittens, UW-Madison’s Interim Chief Diversity Officer, will provide introductions and context for the event. Learn more and mark your calendars!

In her biography of the influential professor and scholar, Dr. Nellie Y. McKay, Dr. Shanna Greene Benjamin examines Dr. McKay’s strategies for succeeding professionally while navigating the white-dominated academy. Dr. McKay (1930-2006), served on the UW-Madison faculty from 1977 to 2006, during which time she co-edited The Norton Anthology of African American Literature with Dr. Henry Louis Gates Jr. With the Norton Anthology, Dr. McKay created a space for the study of Black literature and Black feminist thought in the academy.

Despite gaining notoriety in her academic life, Dr. McKay chose to hide details about her personal life from her colleagues. Dr. Benjamin’s research demonstrates that this secrecy was a strategy McKay deemed necessary for her professional success. Dr. Benjamin’s book, Half In Shadow: The Life and Legacy of Nellie Y. McKay (UNC Press, April 2021), lays bare the social climate in which Dr. McKay lived, the academic atmosphere in which she worked, and the strategies she employed to succeed in the white academy. Dr. Benjamin goes on to connect Dr. McKay’s life and legacy with the sacrifices and strategies of contemporary women of color in the academy.

Dr. Shanna Greene Benjamin is an independent scholar and author who lives in Charlotte, North Carolina. The Friends of UW-Madison Libraries are pleased to bring Dr. Benjamin to campus via a virtual event on April 8 at 4 PM CDT, a week before her book is released. She will be joined in conversation by Dr. Monica M. White, UW-Madison faculty member, and author, as they tackle the issues raised in the book. Dr. Cheryl Gittens, UW-Madison’s Interim Chief Diversity Officer, will provide introductions and current context for the event.

To offer a taste of the conversation to come, we sat down with Dr. Benjamin to talk about her new book and to discuss some of the surprising revelations that her research uncovered.

Nellie Y. McKay was your advisor while you studied at UW-Madison. Did you have glimpses of her personal life at that time? Did your perspective about her change during the research process?

Benjamin: As her graduate student, the piece of her personal life that I had access to involved her love of entertaining, of bringing folks together around good food and drink. Whenever her colleagues came into town or she hosted symposia, she invited us along. But she and I didn’t have the kind of relationship where she would have revealed anything private to me. McKay was a Black woman who I considered my elder, so I respected her privacy and focused on our working relationship. The perspective that changed the most during the research process was my understanding of the climate in which she lived and worked. The world expected her to put a ceiling on her aspirations because she was a Black woman. She rejected that outright. McKay’s story made me appreciate the fortitude Black women demonstrate to pursue their dreams or to create pockets of joy and possibility when those dreams are deferred. 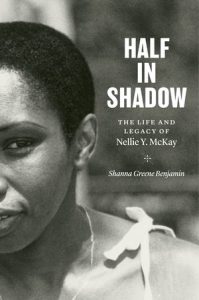 In your book, you show that McKay felt required to hide certain aspects of her life to succeed in predominately white academia. What were some of the things she concealed?

Benjamin: I don’t want to give away too much, especially since I want folks to read the book, but I’ll say that when McKay entered graduate school at Harvard in 1969 then joined the faculty at UW-Madison in 1977, Black women were new to the white academy; Black women were already fixtures at historically Black colleges and universities. To be taken seriously first at Harvard and then at UW-Madison, McKay curated an image that steered colleagues and peers toward her work and not her personal life. When folks made assumptions about her age, she never corrected them. She accepted such suppositions because they favored her. So, when she passed, many of us were surprised to find out all she kept hidden.

UW-Madison Archives processed and retained the Nellie Y. McKay papers that helped you write your book. Can you say a little bit about why this is notable?

Benjamin: Black women’s lives have not been considered valuable enough to have associated papers and ephemera preserved, let alone processed or digitized in what I’d call traditional archives. When an archive processes papers, it’s a financial investment but it’s also an intellectual invitation that says to researchers: these materials matter to us, we want you to know what’s here, please visit. I was grateful that the UW-Madison Archives recognized the value of McKay’s papers by processing them. This helped me but it will also serve future researchers. To build my book’s archive, which went beyond what I found in special collections and the like, I also interviewed McKay’s friends and family, asking for documents and materials in their possession that would add color to my portrait of McKay’s life. These unpublished materials were crucial, as were the interviews I conducted, to tell the story I wanted to tell.

What do you admire most about McKay as a professor?

Benjamin: One of the things I admire most about McKay as a professor was how she built institutional bridges and modeled for her students and the profession how to collaborate. She rejected the model of an individualist and adversarial academy and, instead, developed the Bridge Program between UW’s Afro-American Studies Program and Madison’s Ph.D. programs in English and History. She also integrated the study of African American literature into UW-Madison’s English department. She poured into her students and showed us that we could each have a unique and positive impact on the professoriate if we did our work and were always “lifting as we climb.”

Do you believe women of color in academia continue to face the same challenges McKay did? How, in your opinion, can change be affected?

Benjamin: Yes. Absolutely. My view on the possibility of affecting change shifts depending on the day and whether I feel more or less hopeful about the ways of institutional gatekeepers. I believe the system is the problem, and because institutional systems are inherently racist and biased, they need to be overhauled to pursue true equity. I see far too many responses to systemic inequalities that rely on individuals to propel them forward. For example: McKay implemented institutional change but when she passed, her programming languished. The practice of placing the future of what we now call diversity, equity, and inclusion initiatives on Black and Brown bodies is unsustainable, hazardous, and depressing to those who do this work. I’m convinced that the structure itself needs liberating if women of color in the academy are to be the full beneficiaries of the advances made by McKay and other women of her generation.

For more, join this livestream event on Thursday, April 8 at 4 PM CDT. No registration is required.

The Friends of UW-Madison Libraries strives to ensure our events are inclusive and welcoming for all participants. If you need accommodation, please contact Friends@library.wisc.edu.