Since November 2017, the UW Colleges and Extension System have undergone an extensive restructuring. Following budget cuts and declining enrollment, the Board of Regents approved to dissolve the system as its own entity and to designate the individual colleges as branch campuses of nearby UW universities. Additionally, part of the former UW Extension moved to UW-Madison while another portion was absorbed by the UW System.

In order to record the experiences of those involved in this complex undertaking, the UW System provided financial support to the UW Archives Oral History Program to conduct and preserve interviews with individuals who worked in the several different areas impacted by the restructuring.

Troy Reeves, head of the Oral History Program explains the origin of this project. “It arose from University Archivist Katie Nash who pitched the idea at a meeting with UW System staff and then those System staff found funding for it.” 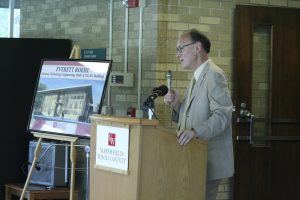 It included those who worked for UW Colleges, UW Extension, and UW Universities in Academic Affairs, Finance, Administration, and other areas of expertise. Additionally, individuals involved in restructuring within the UW System and those who worked in System-wide, regional, and campus-level positions were interviewed.

The resulting oral narratives offer a wide array of perspectives on the restructuring and its impact on the landscape of higher education.

“All of my interviewees were part of a difficult process in which emotions ran high, and difficult decisions had to be made,” says Lena, who conducted and processed many of the interviews. She notes individuals’ responses to the restructuring varied greatly according to their role and level of access to information.

She explains that working on the UW System project introduced her to the wide range of structures and activities that administrators within higher education engage with. “I hope that people that listen to the interviews in the future will be able to learn about all of the complex work that administrators do.”

Troy credits Lena with helping create oral histories that will inform current and future generations on the reasons for and results of the UW System restructuring. “This complex project – based on a recent and for some people raw current event – could have been fraught with issues,” he says. “But thanks to Lena, it wasn’t. She handled the work quite well.”

Lena highly enjoyed the interview process and says she’s more aware of and appreciative of the mission and officials that work within the UW System.

On the importance of preserving these reflections, she explains, “Ultimately, examining the restructuring process, how it was perceived by different administrators within the UW System, and the criticisms of how the process played out are very important to how it may be perceived in the future.”