The Friends’ annual Schewe Lecture, in partnership with the Wisconsin Book Festival, is pleased to announce 2018 Pulitzer Prize winner Caroline Fraser— editor of the Library of America edition of the Little House series.  Fraser will reveal the grown-up story behind the influential childhood epic of pioneer life, Laura Ingalls Wilder, drawing on unpublished manuscripts, letters, diaries, and land and financial reports to set the record straight. 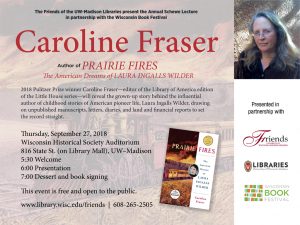 Given the recent controversy over stripping the Wilder name from the Association for Library Service to Children award, as well as other recent efforts to purge symbols that honor historical figures who owned slaves or engaged in racist practices from our history books and landscapes, Caroline Fraser has timely insight on issues that surround early America’s assumption of Manifest Destiny, the treatment of the Native Americans, and the desperate struggle of the 19th century pioneer. Fraser offers a well-researched book which paints a more accurate picture of the reality of Laura Ingalls Wilder’s life.  In addition, Fraser does a masterful job of describing the cultural and historical pressures that were in play during Wilder’s early years which shaped the perceptions reflected in her Little House series.

The Little House books, for all the hardships they describe, are paeans to the pioneer spirit, portraying it as triumphant against all odds. But Wilder’s real life was harder and grittier than that, a story of relentless struggle, rootlessness, and poverty. It was only in her sixties, after losing nearly everything in the Great Depression, that she turned to children’s books, recasting her hardscrabble childhood as a celebratory vision of homesteading—and achieving astonishing fame and fortune in the process.

Spanning nearly a century of epochal change, from the Indian Wars to the Dust Bowl, Wilder’s dramatic life provides a unique perspective on American history and our national mythology of self-reliance. With fresh insights and new discoveries, Prairie Fires reveals the complex woman whose classic stories grip us to this day.

Caroline Fraser will be speaking at the Wisconsin Historical Society on Thursday, September 27 at 6:00 P.M., with opportunities for questions and book signing following.