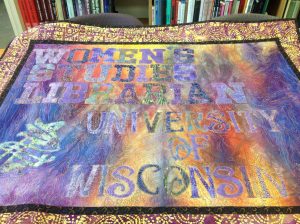 What began as a two-year pilot program staffed by a “Librarian-at-Large” has developed into an information resource hub with global impact. The Office of the Gender and Women’s Studies Librarian marked its 40th year in 2017. Since its founding in 1977, the Office has grown from serving students, faculty, librarians, and administrators across the UW System to cultivating partnerships nationally and internationally while remaining true to its original mission.

“Celebrating 40 years of work, education, and outreach is humbling,” said Karla Strand, who has served as the Gender and Women’s Studies Librarian since 2013. “This office was years in the making. I look at what so many people have accomplished in this relatively short amount of time and am energized by the possibilities in our future.”

“We believe that the office is the only one of its kind in the country dedicated solely to GWS, feminist, and LGBT librarianship,” she added.

“Librarian-at-Large” was the first official title for the role. Sue Searing, who later served in the position — by then known as Women’s Studies Librarian — from 1982 to 1991, wrote that the original title “signaled the innovative nature and wide-ranging responsibilities of the position…[which] supports and enriches women’s studies, research, teaching, and outreach throughout the UW System” (Sue Searing, in Chapter 6 of Women on Campus in the Eighties: Old Struggles, New Victories, 1993).

The position and the office were formally established in 1977, but the idea that the university needed librarians with expertise in women’s studies had been developing for years. Information was often scattered across a range of subject areas, and access to resources was often uncoordinated and incomplete. “Clearly, the idea reflects the creativity and nontraditional thinking that invigorated academic feminism,” Searing wrote. “The emerging field of women’s studies was causing severe bibliographic headaches which an expert librarian seemed best prepared to cure.”

The unique decision was also made that although the Librarian-at-Large would maintain a “headquarters” on the UW–Madison campus, the position and the Office would serve the entire UW System. The process of funding the project was itself a formidable example of the influence and ability of feminists to transform the situation of women on campus. After an initial proposal was rejected by the governor’s office, tireless faculty and librarians around the state successfully convinced the UW System’s vice president for academic affairs to fund the position, with the Office housed in Memorial Library and Esther Stineman serving as the first Librarian-at-Large. This position could provide the knowledge and skill necessary to locate, acquire, and disseminate information about relevant resources in the growing interdisciplinary field of women’s studies.

Esther Stineman spearheaded several projects to develop the Office’s outreach. She created a “union catalog” of women’s studies materials across the campuses in the UW System, encouraged her staff to compile reading lists on relevant topics, and purchased the History of Women microfilm collection. With colleague Catherine Loeb (the Office’s first editor), she published Women’s Studies: A Recommended Core Bibliography, a guide to nearly 2,000 books and periodicals considered essential for library collections supporting women’s studies courses.
Stineman left her post as Librarian-at-Large after 19 months to return to graduate school. Linda Parker, a women’s studies specialist from the University of Kansas, was then hired, as the project’s pilot funding had successfully been renewed.

Parker ushered in the computer technology age for the project when she acquired the Office’s first microcomputer. She also launched a national effort to engineer an electronic database in women’s studies. Parker was committed to a “feminist librarians’ motto” of, in her words, “building networks, disseminating new information and research, launching new campaign for change, and stirring new insights, and nurturing our growth as individuals.” (Transforming women’s education: the history of women’s studies in the University of Wisconsin System, page 93.) 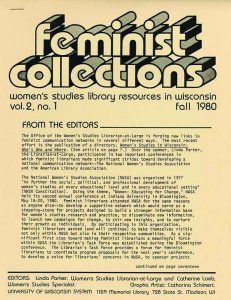 As resources and technology grew, so did the visibility of the Office, in large part through the topical reading lists known as Wisconsin Bibliographies in Women’s Studies, as well as through what became its flagship subscription publications: New Books on Women, Gender, and Feminism; Feminist Collections: A Quarterly of Women’s Studies Resources; and Feminist Periodicals: A Current Listing of Contents. As part of the Office’s rebranding effort during its 40th-anniversary year, those three subscription publications have been given a design makeover, and Feminist Collections will be published under a new title in 2018: Resources for Gender and Women’s Studies: A Feminist Review.

In 1989, the UW Women’s Studies Consortium was created to help develop and support the growth of women’s studies programs in Wisconsin as well as to nurture a collaborative model of interinstitutional educational innovation.

Today, the UW System Gender and Women’s Studies Consortium consists of an advisory panel of representatives from each of the GWS programs across the System who meet twice a year to discuss issues, cooperate on initiatives, and further UW goals as they pertain to women across the state. The Consortium maintains numerous partnerships and has held the Midwest’s premier GWS conference for 40 years. The GWSL Office is a member of the Consortium and assists in conference planning each year.

In 40 years, only five individuals have occupied the position now known as Gender and Women’s Studies Librarian: After Stineman and Parker, the role was filled by Sue Searing and then by Phyllis Holman Weisbard; the position is now held by Karla J. Strand. Searing helped the Office solidify its place as an important part of the interdisciplinary program across the UW System. During her tenure she published another volume of Women’s Studies: A Recommended Core Bibliography, ensuring continued access to these rich resources.

Similarly, Weisbard took it upon herself not to let the work and success of the office slow down. Fondly recalling her 22 years in the position and the key partnerships she created with Consortium members, including Jacqueline Ross, Fran Garb, and then Helen Klebesadel, she said, “I have great memories of travelling around the state with them, both of our official business, which included a lot of strategizing, and of fun dinners out and side trips. When asked about my job, I could say being part of the Consortium as a librarian meant being the resource/research arm of the Consortium and travelling to System campuses, but it also meant participating in Consortium projects, from a history of the Consortium itself to a Wisconsin Native American Nations website.” 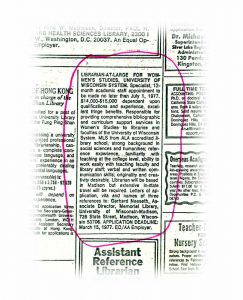 Karla J. Strand, hired through a national search following Weisbard’s retirement in 2013, has turned her attention to how the Office can make a greater impact beyond the borders of Wisconsin to both the national and international communities. “Our goal is to build on what was started and become an international center in gender and women’s studies,” explained Strand.

Strand noted that in order for many developing international communities to participate fully in the knowledge society, they often need assistance with finding and accessing resources, learning digital literacy skills, and developing structures for information sharing and preservation. She believes the Office of the Gender and Women’s Studies Librarian can play a significant role in providing this information, training, and support for individuals and communities, all predicated upon feminist values of gender equality, agency, and sustainability. As the focus of her doctoral research, the role of information and libraries in the empowerment of women and girls around the world is a guiding value that Strand brings to the GWSL Office. This is demonstrated in the digital projects the Office coordinates, including Wisconsin Women Making History and the International Women’s Library, as well as in the individual research assistance Strand provides to scholars and activists from across the U.S., as well as countries such as Iran, Malawi, Nigeria, and Spain.

Strand and her staff feel they are not only up to the tasks of continuing to publish guides to new materials, expanding digital resources, and building international partnerships in the years to come; they look forward to the challenges and possibilities in front of them.

“We want to see how this office can have an impact on people around the world,” she says, “and we are poised to make that impact.”