Wandering the libraries on the University of Wisconsin–Madison campus can result in the discovery of countless resources: books, journals, movies, games, equipment to check out, and…your mother? But that’s (kind of) what happened to Notesong Srisopark Thompson one day during her freshman year in 1993.

“I remember it so vividly, I was looking in the 4M PL section of Memorial Library, almost as if that area was calling me,” said Notesong. “Sure enough, there she was, peeking out from one of the shelves.”

Before the hairs on the back of your neck stand up much farther, no, it wasn’t actually Notesong’s mother standing before her. But it was one of her books.

“I called her when I got back to my dorm because I was so excited to see her book, and one with my face on the cover, to boot,” explained Notesong.

So, just who is Notesong’s mother? One of the most revered novelists in Thailand: Rampaipan Suwarnasarn Srisopark, or better known by her pen name, Sopark Suwarn. Over her storied career, she’s been honored by royalty and generated a nearly cult following for her books, some of which documented her family’s lives as they moved from Thailand to the United States in 1973. The ministry of education in her native country even used her work as a way to help broaden the understanding of American culture beyond the glamor of Hollywood.

“I have been inspired by many people through the years, including my parents, who have impacted what I write, how I write, and even how I research,” said Suwarnasarn Srisopark. “But two authors I have always really loved are Laura Ingalls Wilder and Pearl S. Buck.” 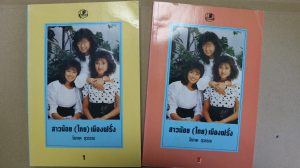 Her work (which includes more than 120 books) ranges from historical fiction pieces to comedy, romance to travel documentaries, and even psychology. Suwarnasarn Srisopark’s books have even been turned into television shows. As the Bangkok Post noted, “Among her dozens of novels, Fah Jarod Sai is her most famous: the story of romantic and patriotic love set in the desert of a fictional Arab kingdom. This classic has been published 23 times and became a popular TV drama series twice, and even a Broadway-style musical in 2007.”

The insatiable need to learn and to share her discoveries, thoughts, and imaginative ideas drove Suwarnasarn Srisopark from an early age. Born in Bangkok, she began writing at age 8 and entered a writing contest at age 11, winning an award for her short story, “My Best Friend,” which was published in the Sarn Seri, a daily paper. Decades later, her success is world-renowned. In 2014, she was honored as a National Artist of Thailand in the Field of Literature.

After she and her husband met in Vienna, Austria, in 1965 while both were studying at the University of Vienna, they moved back to Thailand to start a family, and eventually immigrated to the United States with their two young daughters, Chitsupang Srisopark Weekes and Apiromraj Srisopark Roslansky. Their youngest daughter, Notesong, was born in Kansas. The family’s adventures served as content for some of Suwarnasarn Srisopark’s most popular works, in particular, “Joht Mai Thung Khun Yai” (“Letters to Grandma” – her mother), which told stories about her daughters’ childhood follies written from their young perspectives. 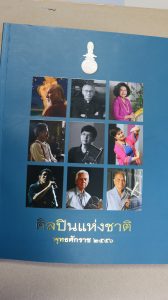 But as much as Notesong loved her mother’s work, there was always just one piece of the puzzle that seemed to be missing.

“I took first year Thai at UW–Madison with Professor Bob Bickner more than 20 years ago. It is such a challenging, complex language. So, I had never been able to actually read her books because they’re in Thai,” explained Notesong. “I speak and understand it fluently, but I forgot how to read in Thai! So while I knew what she was writing about, I’d heard her stories, she had bounced storylines off of my sisters and me, I wanted to be able to actually translate the books about our family and the novels that she had penned.”

Enter UW–Madison (again). Over the summer of 2017, Notesong revisited her Badger roots to jump-start her plan to translate her mother’s books. She took an intensive eight-week course through SEASSI, the Southeast Asian Studies Summer Institute, to relearn how to read in Thai.

“I can’t believe how intense SEASSI was,” said Notesong. “It is going to take me a while to translate my mother’s books because of the artistic level of her writing, but without a doubt, this program is going to be the reason I’m able to undertake such a wonderful project.”

Suwarnasarn Srisopark said she’s thrilled and touched by her daughter’s desire to not only read her work, but to invest so deeply in it so that it can be shared for generations to come. 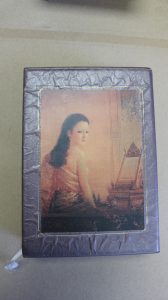 “It means so much to have my children know what I do, understand my passion, and care enough to find new ways to interact with it and share it,” said Suwarnasarn Srisopark. “It’s not just for my daughters, but my grandchildren. My work covers many genres, but so much of it is a history of our family, essentially. They’ll have the opportunity to understand their family’s journey in such a unique way.”

For Notesong, the journey of translating her mother’s work may take time. But it’s a project she considers a gift.
“I know it seems like translating her books might be a gift to her,” explained Notesong. “But really, it goes both ways. To think my children could walk through Memorial Library and find her books, and be able to read them, that is truly a gift to us.”