Living in the Past: Director of the University Archives Retires 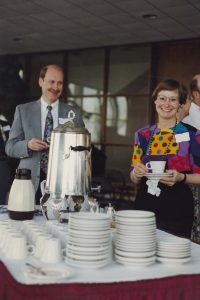 When David Null, the Director of the University Archives, announced he would officially retire in December 2017, it was a moment the Archives team knew was coming, but one they weren’t looking forward to. With over 30 years of experience, 23 of which were spent at the University of Wisconsin-Madison, Null has a vast knowledge of archival practices he’ll be taking with him into retirement, but he’ll leave behind a legacy of innovation. Under Null’s care and expertise, the UW Archives have become one of the premier academic archives in the country. It’s an achievement Null credits to the team around him.

“I’ve been fortunate to work with really great, forward-thinking people who have been instrumental in looking for new ways to push our work into the future,” explained Null. “I’m also lucky to be in a position where so much of my work results in really just making people happy. It’s amazing the reaction you get from people when you find something in our archives that means so much to them. That joy is a reward in itself.”

Before coming to Wisconsin, Null spent four years as a Social Science Librarian at Miami University. Upon leaving Ohio, he worked for 10 years as the Coordinator for Social Science Collection Development and as head of the Reference Department at the University of New Mexico. In 1994, Null became the Head of the Reference Department at UW-Madison, a position he held until he became the Acting Head of the University Archives and Records Management in 2002. Since officially taking the helm as the Director of the Archives in 2005, Null has taken strides to make the Archives more accessible, in part, by harnessing the newest technology possible to move materials online. Noted Troy Reeves, Head of the Oral History Program, Null has been a driving force for moving the Archives into the digital age.

“Before I got here in 2007, all of our interviews were conducted and stored on analog cassette tapes. There isn’t an easy-button to press to turn a cassette tape into a digital file,” explained Reeves. “It was going to be a long process and David was crucial in advocating to get the necessary equipment.”

Null and Reeves hired students who spent almost three years digitizing around 2,500 hours of recorded interviews, most of which are now accessible online. Null also kick started the process of digitizing the Archives’ two million photographs. While ensuring materials continued to be digitized and put online, Null also turned his focus on more aggressively promoting the other materials in the Archives. 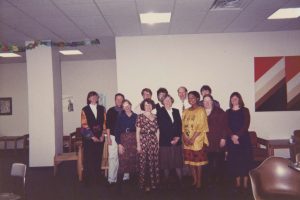 “It’s become increasingly important to help patrons understand that our online materials represent only a fraction of our entire collection,” said Null.

During his time at UW-Madison, Null helped transform the Archives in many ways. His efforts have long been focused on creating a more diverse, accurate representation and timeline of the University’s history. Instead of only holding papers and memorabilia from the former chancellors and deans, Null also acquired materials from different groups across campus and the Madison community. Notably, after receiving grants from the New Harvest Foundation, the George L. Mosse Program in History, and several other donors, Null, a student archivist, and a steering committee launched the Madison LGBTQ Archives, offering the LGBTQ community a safe place to donate their materials, where they will be properly cared for and made available to the public.

Since the inception of the LGBTQ Archives, it has received over 80 collections from local individuals and countless hours of oral history interviews. Funding from donors has allowed the Archives to digitize materials, acquire new collections, hire students, and hold exhibitions.

“This outreach helps not only promote the Archives, but it strengthens the LGBTQ community by giving them an opportunity to discuss and understand their past,” said Null.  “There are still many important events in Wisconsin’s history that are undocumented, especially the history of underrepresented populations.” 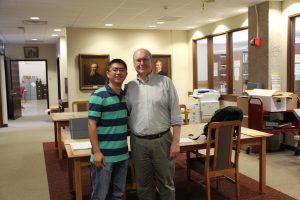 The rise of the digital age also meant the rise of new types of documents the Archives received. Cat Phan, the Digital and Media Archivist, noted Null has advocated for the changes required to deal with these new types of materials.

“The records that document the history of the University are now mostly electronic, whether email correspondences, records of the Board of Regents, or social media feeds of University Communications,” said Phan. “We are developing digital archiving practices that will help us preserve these records.”

As his time at UW comes to an end, it’s clear Null has made an immense impact. His leadership has not only helped guide his unit into the digital age, but has focused on the need to create a more accessible and inclusive department. Null’s knowledge will be especially missed by his coworkers, so much so that Phan and others joke they need to “download Null’s brain” before he sets off on his new adventure.

“I will miss working with my colleagues in the Archives, the campus libraries, and the broader archival communities. I’ll especially miss our students.” said Null. “But, I honestly won’t miss navigating to campus in a snow storm.”

Want to wish David happy retirement? Join us for his retirement open house!