University of Wisconsin-Madison Libraries, Center for the Study of Print and Digital Culture Welcome Professor Eric Slauter to Campus to Celebrate the Acquisition of Henry David Thoreau’s Classic Walden 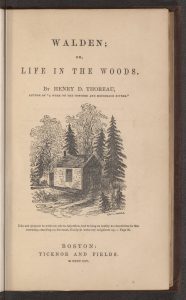 On November 6, the University of Wisconsin-Madison Libraries will host Dr. Eric Slauter, Associate Professor of English and Director of the Scherer Center for the Study of American Culture at the University of Chicago, who will present his talk entitled “Walden’s Carbon Footprint: People, Plants, Animals, and Machines in the Making of an American Classic.” This event celebrates the Libraries’ acquisition of the first edition of Henry David Thoreau’s Walden.

Walden; Or, Life in the Woods was first published in Boston in 1854 by the publishing firm Ticknor & Fields, which also published works by Nathaniel Hawthorne, Harriet Beecher Stowe, and Ralph Waldo Emerson. Walden is now one of the most iconic books in American literature. The University of Wisconsin-Madison Libraries acquired the first edition in April.

Slauter, who is currently working on a book history of Walden entitled Walden’s Carbon Footprint: People, Plants, Animals, and Machines in the Making of an Environmental Classic, has noted that he has long been fascinated by the “material history” of books. 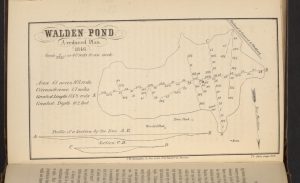 He describes his Walden book history work as, “A blend of environmental, labor, and literary history, the project examines the supply-chain of raw materials in the 1854 first edition of Thoreau’s book, from cotton-based paper and linen thread to animal-skin glue, considers the many people who contributed to its production (including enslaved African-Americans in the South, commodity brokers, northern mill workers, European rag-pickers, and women and children in the printing trades), and reflects on the literary genealogy of our contemporary desire to know the origin as well as the environmental and social impact of objects in our daily lives.” 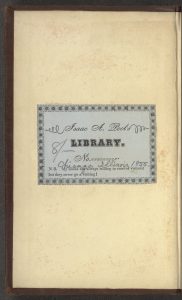 “This acquisition was perfect for the University of Wisconsin-Madison Libraries,” says David Pavelich, Director of Special Collections and Archives. “Our campus has a rich tradition of thinking about ethics, ecology, and the environment. Dr. Slauter’s work brings together book history and environmental studies in a provocative way, which asks us to take a fresh look at Walden and the meaning of its publication.”

Dr. Slauter is the author of The State as a Work of Art (University of Chicago, 2009), and several book chapters and articles. Slauter also teaches several classes that draw on libraries, among them History of the Book in America. He works closely with special collections at the Newberry Library and the University of Chicago.