Emilie Songolo: The Fabric of an Outstanding Career

Each year, several women from the University of Wisconsin-Madison are honored with an award for being Outstanding Women of Color. They’re a diverse and accomplished group; all from different backgrounds and with different stories to tell. Among the 2015-2016 award recipients was subject specialist librarian Emilie Songolo, who recently shared her thoughts on her life, the libraries, and what receiving the award meant to her.

Songolo is a native of Cameroon, a Central African country located on the Gulf of Guinea. She was excited to share that she’s currently working with a UW student who is studying Bassa, her native language.

“It’s not very often that I get to text with someone in Bassa!” she laughed.

Songolo started working for the Libraries in 1991 as a reference librarian, co-coordinating the Memorial Library Instruction Program. In 2001, her job changed and she found herself in charge of collection development for print reference. At the same time, the Libraries created the position of Francophone Studies Bibliographer and added it to her duties. This role would follow her into 2007, when she became a full-fledged bibliographer Social Sciences and African Studies.

“It’s been a metamorphosis, really, meeting all my professional dreams,” she said. “There’s still a lot to do; a lot of goals that I need to reach.”

Nevertheless, her achievements thus far are both numerous and impressive. Songolo is deeply passionate about her work and devoted to the idea that learning and serving go hand-in-hand. One of the things she loves the most about being at a large university, she said, is having the opportunity to play a mentorship role for students. Back in the early 1990s, she helped create an internship program for undergraduates, which then morphed into the Information Specialist Internship Program (ISIP).

“Library work as a profession is not well-known. People think all kinds of things about it that are not real. I like helping students learn what it’s really about from my little corner,” Songolo said. “We’re fortunate to be at a place like this.”

She went on to explain that for students interested in studying areas of the world outside the United States, many of the most useful materials are not in English and not found on the Internet. Thus, a multi-lingual librarian coupled with a one of the largest library collections in North America is an extraordinary asset.

“I see my role as a holistic subject specialist, and that’s really how I live and work wherever I am….I think languages are very important. When you read many languages, you go all over the planet. To other planets, even! Your mind opens wider, you learn a lot more. This opens a lot of doors,” she said.

By no means is Songolo’s work limited to written materials. One of her biggest and most fascinating ongoing projects is a collection of commemorative African fabrics. She started gathering them about 30 years ago and donated them to the library to make them accessible to others.

“To me, [fabrics] are important documents. They can help us understand society in a lot of ways,” she said. She explained that fabrics can serve a variety of different purposes; from celebratory and educational to propagandistic. In Africa, they can represent political parties, holidays, people, causes, and countless other things. Songolo describes them as a medium of communication in their own right.

“They bring people together,” she said. She recalled that, at her daughter’s commencement ceremony from UW-Madison, all of her guests wore a certain kind of fabric to honor her daughter. “When people wear fabric in this way, they feel a deep sense of belonging. It’s a uniform….Nobody wants to be left out. It’s just that powerful of a tool.”

Songolo told a story of another time when she was travelling in South Africa, and came across a piece of fabric from Mali, that she had never seen before. After bringing this fabric back to the United States and studying it, she discovered that it told the story of the massacre of Malian youth in March 1991.

The fabrics are a way to document something that might not be written down; a method of visually capturing a story or a moment that might not otherwise have been discovered. Songolo has started working to take advantage of the technological advancements of library work and store them digitally.

“The goal is to preserve them in this digital repository of fabrics because they might disappear,” she said. “You have to be there when they come out, to capture them. They are very ephemeral.”

Technology has influenced her work in other ways, as well. For example, Songolo creates online research guides for courses that she teaches at UW so that students can access their materials easily. She does feel, however, that there is a great deal of responsibility that comes with having information as easily accessible as it is today.

“Technology today enables us to deliver materials in a timely manner….I think we need to be more critical because information gets to you faster and easier,” she said. She explained that technology can be used to create new resources and to help people communicate more effectively with each other if they are lucky enough to have access to it. 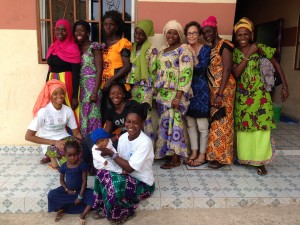 Even outside the Libraries, Songolo is a force for goodwill in the Madison community. She works to raise awareness about issues affecting people in places like the Democratic Republic of the Congo, a country in Central Africa that has been ravaged by war. She also organized and led an informational town hall meeting and documentary series about U.S.-Haiti relations after the Haitian earthquake in 2010. Her volunteer work is, in part, to further the legacy of her younger brother, an avid philanthropist who was killed in a car crash.

“I like working for a cause, I like doing things about situations….There’s a lot to be said for the therapeutic aspect of doing something when there is a need,” she said. “Often, helping people can be as simple as keeping them company. Your time is one of the best gifts you can give. It can make the biggest difference in other people’s lives. When something terrible happens, it’s sad. But we’re not going to stay deep in sadness. We have to get up and do something about the event, something that can make a difference.”

Songolo emphasized the vital role that libraries play in a university, as well as how incredibly lucky the UW community is to have access to such a vast wealth of resources. She had finished her undergraduate studies in Cameroon before she even set foot in a library, and she hopes to continue helping students see the many ways that libraries can help them.

Receiving the award and joining the ranks of other Outstanding Women of Color, she said, was a great honor.

“There’s a lot of good that I’ve benefitted from, and I try to give that good back right here in Madison,” she said. “I grew up somewhere, but this is my home and I have to make it better. The award, for me, affirmed that.”

There is no doubt in the minds of anyone who has met or worked with Songolo that she has, indeed, made her communities better both inside and outside the university. She is the very embodiment of the idea that libraries are far more than just collections of books, but rather endless repositories of information where one can discover how to do anything from compiling a report to speaking Bassa. The libraries would cease to function without hardworking and dedicated people like her who share their own expertise and experiences for the good of others. Songolo’s award, as well as a great deal of appreciation for her incredible contributions to the libraries and the UW community, is well deserved.