Soccer on a String: An Exhibit Celebrating Brazilian Poetry, Life, and Culture 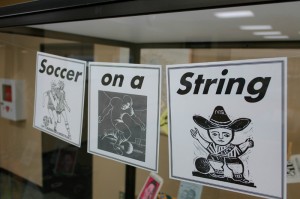 Inspired by the 2014 FIFA World Cup, a new exhibit in the Memorial Library circulation area, entitled Soccer on a String, showcases colorful and eye-catching selections of Brazilian cordel literature.

Dr. Mark J. Curran from Arizona State University describes cordel literature, or “Literatura de Cordel from Brazil, [as] folk-popular poetry which thrived in Northeastern Brazil for most of the twentieth century.  It is written by humble, backlands poets or urban poets, most with very limited formal schooling, but with the gift of verse.  The pioneers of cordel were from the Northeastern states of Paraíba and Pernambuco, and many were steeped in the oral tradition of the cantador or improviser of oral verse in the Northeastern poetic duel.”

Paloma Celis Carbajal, Latin American & Iberian Studies Librarian at Memorial Library, and her graduate assistants, Jared Hendrickson and David Korfhagenboth, Ph.D dissertators in the Department of Spanish and Portuguese, developed the exhibit to showcase the library’s collection of Brazilian cordel literature and some of its soccer chapbooks. The concept arose from the realization “of how relevant some of [the] chapbooks were, especially this summer with the World Cup being in Brazil, and given how popular soccer and this type of literature is in that country.”

The Cordel Literature Chapbook collection at Memorial Library is among the top ten largest in the U.S. It started in the 1970’s and has been growing ever since. Over the past two years, the library has participated in the Cordel Collaborative Collection program, a part of the larger Library of Congress Cooperative Collection Acquisitions Program-Rio de Janeiro (LC Rio). Thanks to this partnership, about ten academic libraries in the U.S. receive one hundred new cordel chapbooks each year. Instead of sending duplicate chapbooks to the libraries, LC Rio sends unique copies to each region in order to build a stronger cordel collection nationwide. 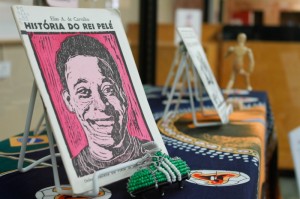 Since 2013, Memorial Library has worked diligently to retro-catalog their current cordel holdings. Previously, the library’s holdings were reflected under one catalog record and patrons were not able to search for specific titles. With the guidance of Memorial Library Catalogers Jamie Woods and Victor Gorodinski and the assistance of Hendrickson and Korfhagenboth, the library hopes to have the cordel collection catalogued by the end of this calendar year.

More information on Brazilian cordel literature can be found through this research guide.

The exhibit “Soccer on a String” will run from June 12th to July 14th and is located in front of the Circulation Desk in Memorial Library.