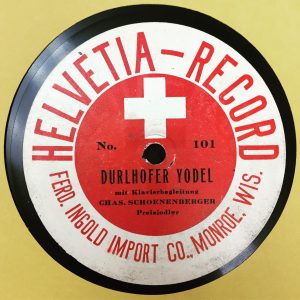 Free and Open to the Public

Come celebrate the release of Alpine Dreaming: The Helvetia Records Story, 1920-1924, a 2 CD-set produced by Archeophone Records in cooperation with Mills Music Library and the Center for the Study of Upper Midwestern Cultures, with partial support from the National Endowment for the Humanities. Richard Martin and Meagan Hennessey have been preserving, restoring, and publishing recordings from the acoustic era of sound—the years from 1890 through 1925 when records were made into the acoustic horn—since founding Archeophone Records in 1998. We have worked with them before, on Attractive Hebrews: The Lambert Yiddish Cylinders, 1901-1905, and we look forward to having them back to discuss their work with Jim Leary on the Alpine Dreaming project. Leary spearheaded this project after spending time with the Helvetia 78rpm records in our collection as part of his work on the Local Centers/Global Sounds project. Martin and Hennessey signed on to help restore and reissue all 36 sides that had been released during the label’s short history, and the 78s we didn’t have were sourced from collectors in Switzerland and the United States. The 2 CDs are accompanied by a 60-page booklet written by Leary, in which he offers extensive background on the label founded by Ferdinand Ingold, a poor but visionary Swiss settler in the small town of Monroe, Wisconsin, as well as the performers. Archeophone Records includes brief sound excerpts for all 36 tracks on its Alpine Dreaming page.

The event will also include performances by accordionist Deb Krauss Smith, and members of the Monroe Swiss Singers yodeling and playing alphorn. We are pleased to co-sponsor this Sound Salon with the Max Kade Institute for German-American Studies, and the Mayrent Institute for Yiddish Culture.