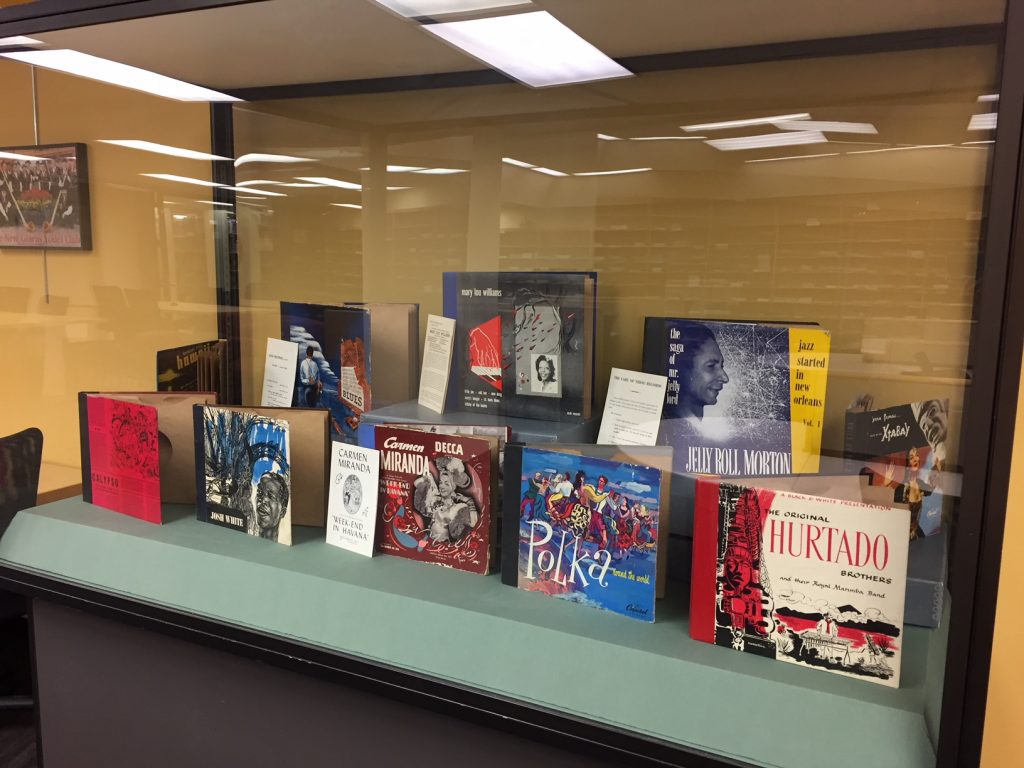 Mills Music Library has set up an exhibit of 78rpm record albums in our large display case, and we will be rotating albums regularly in order to give our patrons the chance to see what all we have. We have thousands of 78rpm records. We also have hundreds of the albums in which they were housed originally, which we deem worthy of preserving as artifacts. As part of our preservation work, we transfer each 78 into an acid-free paper sleeve, put the label name and number on the sleeve, and store the records upright on metal shelves in remote shelving, which is a staff-only area of the library.

The albums are also stored in the same area.

The percentage of our 78s we have digitized, both for preservation and access, remains low. We think of the 78s we have that haven’t been digitized as being like books that can’t be read. We have a sound studio equipped for making transfers, and we continue to work on digitizing all of our sound recordings on fragile media, but it is time-consuming work. Fortunately, there are many people around the world engaged in digitizing 78rpm records, and as time goes by we are finding more of the 78s we have appearing in high-quality transfers online. The Library of Congress makes historical sound recordings available free of charge via the National Jukebox, for example. Mills Music Library is a partner of the National Jukebox, and we will be contributing digitized records in the years ahead.  The Great 78 Project, which is a community project for the preservation, research, and discovery of 78rpm records, was launched last fall by the Internet Archive, and already has over 68,000 recordings online–including all the sides from The Original Hurtado Brothers and their Royal Marimba Band, one of the albums selected for the first installment of our exhibit. Come have a look at the visuals that housed the sounds!