Bass At Your Place: 50 Years of String Pedagogy 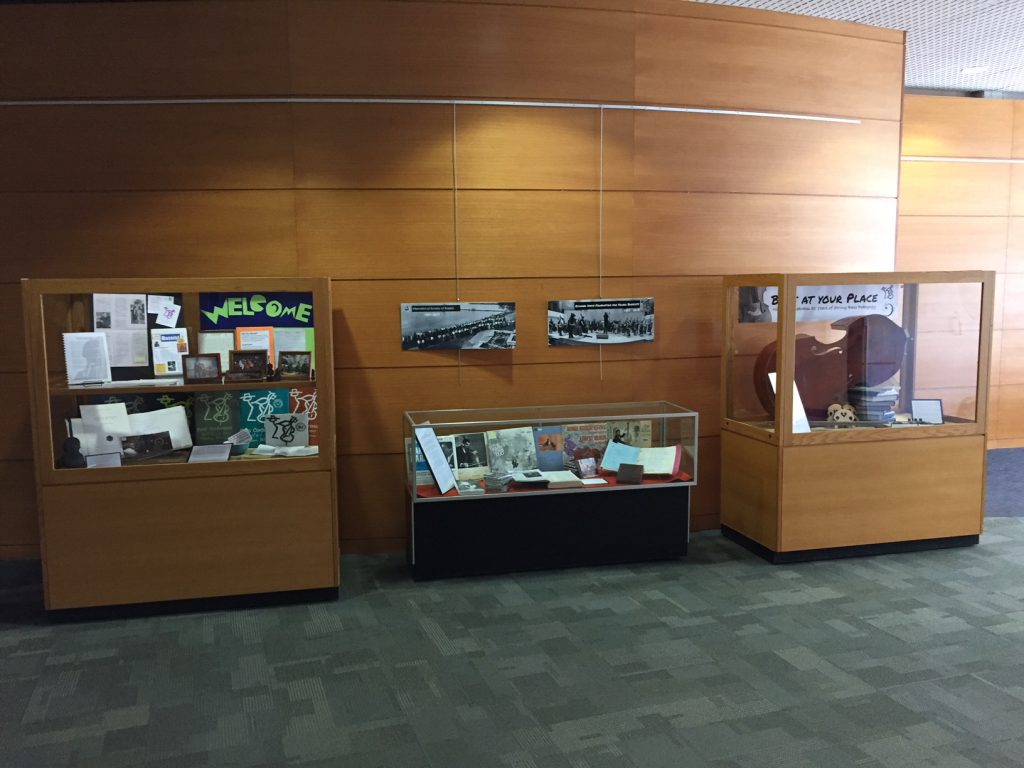 Part of the exhibit is housed in the Memorial Library lobby, with display cases containing a blend of Mills Music Library holdings and archival materials from the the RDYB, selected by Catherine Harris, Executive Director of the Foundation. The ISB and RDYB share a vision of elevating bass artistry and culture, and both hold education, inspiration, and connection as core values. One highlight is a school/student bass made by Lawrence LaMay for the Madison Metropolitan School District. Harris has included text telling the story of how Gary Karr came to Madison in 1966 to work with LaMay on realizing his vision for a new kind of bass.

The rest of the exhibit is in Mills Music Library, with one case devoted to recordings and publications by clinicians who have taught at the Conference over the years, and another displaying materials from the many students Richard Davis has inspired and encouraged to pursue careers as teachers and performers. Scrapbooks containing Conference materials from over the years, ISB information, clippings about Richard Davis, and copies of his teaching documents are also available for the public to peruse.

Davis has made many recordings in his career, and a selection of his LPs from the Library’s holdings are framed and hung on one wall. Also included are photographs of Davis by Steve Braunginn, including two from the Jazz at Lincoln Center ceremony when Davis received the 2014 NEA Jazz Masters Fellowship Award.

Richard Davis came to University of Wisconsin-Madison in 1977, after spending 23 years in New York City establishing himself as one of the world’s premier bass players, performing with Miles Davis, Sarah Vaughan, Frank Sinatra, Eric Dolphy, and many other great musicians. He was Professor of Bass (European Classical and Jazz), Jazz History, and combo improvisation at University of Wisconsin-Madison for 40 years, retiring in 2016. He founded the Richard Davis Foundation for Young Bassists, which is one of his three nonprofits, in 1993.

Conference faculty and alumni will be performing “A Concert for Richard,” featuring unaccompanied works for the solo bass and bass ensembles, on Friday, March 30, 7:00pm, Great Hall, Memorial Union. Tickets are available here.

The exhibit will be up until the first week of April, and is open to the public during hours of operation. Please note that Mills Music Library maintains different hours from Memorial Library. Come see it, and be sure to sign the guest book and share memories or comments.