The 18th annual Madison Early Music Festival Workshop and Concert Series is happening July 8-15, 2017, and its theme is Quixotic Musical Treasures from the Golden Age of Spain. It’s been over 400 years since Miguel de Cervantes published his novel Don Quixote, and MEMF 2017 will explore the wealth of references to the music, art, and literature that flourished and illuminated Spain during the political rise and fall of the Spanish Habsburg Dynasty. 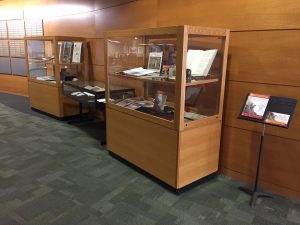 Mills Music Library has contributed materials to a display in Memorial Library’s lobby of holdings from Special Collections and Memorial related to Don Quixote and the Siglo de Oro (1492-1659), so be sure to pause and peruse the materials when entering the building. Mills Music Library has resources galore for participants as well as concertgoers. Come on in and borrow some music for windmill tilting!