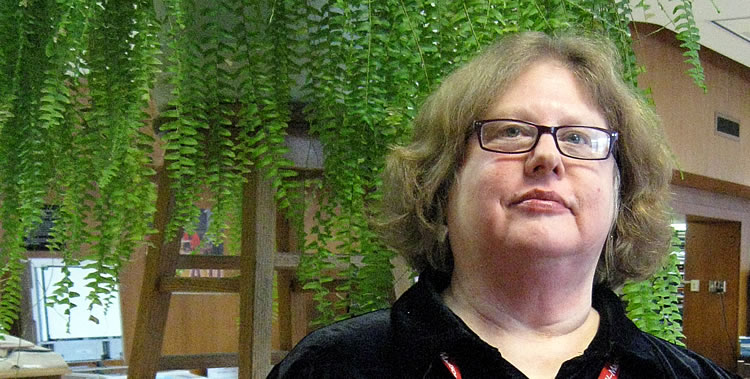 What do you do at the library?
I’m in charge of the Current Periodicals Room. The room has a browsing collection of selected journals and newspapers, including many international newspapers. A few years ago, the room was revamped with comfortable furniture and wiring for computers; it is more heavily used now. Last year, the central Copy Center closed and the Current Periodicals Room took charge of photocopiers and printers in the building, making sure they have paper and are working properly. I also work at the reference desk and do e-mail reference.

What is your specialty?
My specialty is serials and periodicals and interpreting their records in MadCat. I’ve done cataloging in the past. Besides reference, I have strong interests in American literature, women’s studies, and the history of science. Also, I have been here a really long time and have worked in a lot of different areas, so I can provide a historical perspective.

What brought you to your job at Memorial Library?
I came here in 1976. I had worked at the Graduate School at the University of Minnesota but had always wanted to work in libraries. I applied for a job in a unit that no longer exists called Card Production. This was, of course, in pre-computer days. There was a big press on the fourth floor where the Greek and Latin Reading Room is now. We got print cards from the Library of Congress and ran off copies. We had typewriters and typed in all the added entries on the cards. When the libraries got computers, I was put on a team to try out the new technology-computers. Team members worked shifts in a room on the third floor that we called the Terminal Room, where all the computers were (where Business Services is now). When the computers were down, we hung out a pink flamingo to show that the computers were not working—the flamingo’s name was Elsie (L.C.—get it?). Another funny thing is that the phone number of the Terminal Room was similar to some number at the Medical School, so when we would answer the phone “Terminal Room,” it was a little off-putting to people. At that time, I was working in the cataloging area in technical services, then I moved down to Collection Preservation in the basement, and then I came back upstairs. I never, ever thought I wanted to do public service, but I really, really like it. I’ve worked in Reference and the Current Periodicals Room for about eight years now. I also enjoy being above ground again.

What library resource or service would you like to recommend?
I think the library staff is our strongest asset, and I’m a bit partial to the Reference folks since I know them the best. Everyone has their own special areas of knowledge, so you can generally find the perfect person to answer a question. As for other resources, I would say the historical newspapers. Also, all the alternative publications collected by former Wisconsin Historical Society Library staff member, Jim Danky, are amazing.

What is something about you that few people know?
I have a number of musical instruments. I play piano and used to play viola. I have played banjo also and own a dulcimer though I never learned to play it very well. I have played viola in orchestras and small group ensembles. I am interested in early Christian monastic women. Unrelatedly, I belong to a reading group called the Mystery Sluts which also includes Memorial Library graduates (retirees), Helene Androski and Vicki Hill.