On Friday, April 23, 2021, the Undergraduate Research Award team will host its second virtual reception and award ceremony from 2:00 – 2:45 pm. Undergraduate students who intend to make creative and intensive use of library resources as part of a semester or year-long research project are encouraged to apply for this research award. The selected student receives $2,000 upon completion of the requirements of the award, which includes structured library support and a final presentation to library staff. Despite the uncertainty wrought by the pandemic this academic year, the committee, made up of Raina Bloom (chair), Kelli Hughes, Jessica Newman, and Carly Sentieri, was pleased to receive sixteen applications in 2020. After deliberation, they are delighted to have the opportunity to showcase the excellent work of this year’s award recipient, Aaron Kinard.

At the outset, Aaron’s study, Examining Blackness and Rurality: Understanding Racialized Experiences in Predominantly White, Rural Schools sought to capture the racialized experiences of Black students navigating rural, predominantly white institutions. He reports, “Through semi-structured interviews, I hoped to explore how the former students described the racial climate of their former high schools, how racialized experiences in and outside of school impacted their sense of belonging at their former school, and how their experiences shaped their perceptions of Blackness.”

The historical analysis for this study examined Wisconsin from the antebellum period to the 1960s. Then participants from 18 to 24 years of age (thus, likely attending high school between 2012-2020) provided qualitative data. For the purposes of the study, Aaron followed the definition of rural that the WiRSA (Wisconsin Rural Schools Alliance) follows, which is based upon a map of rural Wisconsin completed by the Applied Population Lab at UW-Madison.

As the study continued, its focus evolved. Currently the abstract reads as follows:

For years, educational researchers have long overlooked rural schools even though one-third of America’s public schools are defined as rural, and those rural schools serve approximately one-fifth of America’s students. In discussions of rurality, many associate rural with “white” despite the reality that racial and ethnic diversity has been increasing across rural America. The common association between rurality and whiteness has created a scenario in which non-white individuals are automatically “othered,” and it has created and perpetuated the idea that race does not matter in rural areas. Yet, as the racial and ethnic demographics continue to increase, it is important to think about the ways in which the construction of whiteness and race shape the lives and educational experiences of students of color in rural, predominantly white schools. Specifically, it is important to think about how whiteness functions and is shaped within rural schools and communities in contrast to Blackness, and how this impacts Black students navigating rural, predominantly white schools in states with high white populations such as in the Midwest. We review the current literature on this topic by analyzing key themes: (i) African Americans in predominantly white schools; (ii) African Americans in rural schools; (iii) African Americans in the Midwest; (iv) whiteness, rurality, and the politics of the Midwest; and (v) white supremacy, racism, and microaggressions. Lastly, we finish by summarizing future areas of inquiry intended to expand scholarship analyzing Black experiences in rural predominantly schools.

Aaron’s research study was funded by the Ronald E. McNair Scholars program and he was mentored by Dr. Linn Posey-Maddox and Dr. Walter Stern of the Department of Educational Policy Studies at the University of Wisconsin-Madison. In addition to meeting with members of the selection committee for regular check-ins, Aaron consulted a number of UW librarians and archivists, including Cynthia Bachhuber (Wisconsin Historical Society), Tom Durkin (Social Science), and Troy Reeves (Oral History). Cat Phan and Katie Nash of the University Archives also provided assistance to the selection committee.

The reception on April 23 will include a brief overview of the Undergraduate Research Award program, followed by a presentation from this year’s award winner. There also will be time to ask Aaron questions about his project. Please join in celebrating his accomplishment.

Applications are currently being accepted for the 2021-2022 undergraduate research award. For more information and to apply, please visit the website. Applications are due Thursday, June 10, 2021. 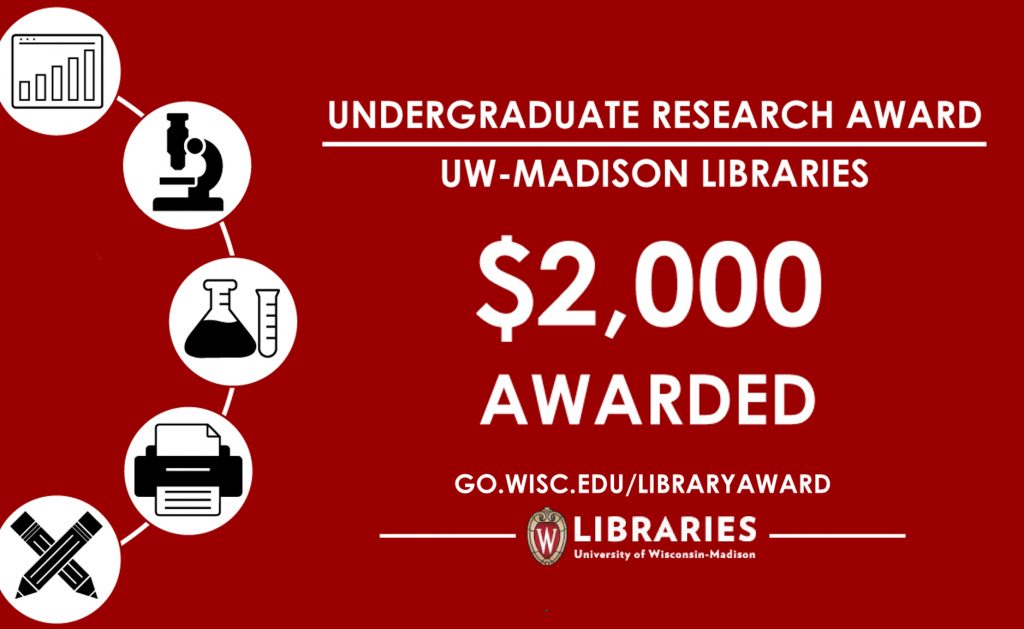