Established under the auspices of the UW’s DesignLab (in conjunction with the UW-Madison Libraries), the Digital Salon has featured new media projects by undergraduate and graduate students in an exhibition every April since 2010. This year’s exhibition opens April 18 and continues through April 28 in Open Book, Room 1250, of College Library. The exhibition showcases artistic and research-based projects that take digital form or rely heavily on IT in the production process.

Mandy Morrow, Associate Director of DesignLab, notes, “This year is the 10th Annual Digital Salon and we wanted it to be bigger and better!” Part of recognizing this milestone, Morrow explains, is “hosting a panel titled Designing Across the University on April 22nd at 3 pm to discuss the role of the libraries and digital design in the ever changing higher education landscape.” Immediately following the panel there will be a small reception from 4:30-6 pm. Many of the students who have projects in the Digital Salon will be on hand to talk about their work.

In all, twenty-three pieces were selected to be included in the online exhibition and they range from a cinema-themed podcast titled Reel Issues by Michael Kok to a series of digital images from Yiting Liu that explore gradients and geometries.

Over a dozen images were printed and displayed in Open Book, Room 1250, at the library. Among them is a video by Mirva Johnson featuring the Oulu Cultural and Heritage Center that received the Best-in-Show award. Ms. Johnson first visited Oulu, a small town in northern Wisconsin populated by the descendants of Finnish immigrants, in 2014 in order to conduct linguistic fieldwork for her master’s thesis. The film, as she notes, “tells the story of one community’s unique response to economic changes and shifts that are happening in rural towns across the country; it focuses on the work the Center’s volunteers have done to preserve and restore area buildings and create a new gathering place for the community where people can come together and celebrate their heritage.”

Other pieces receiving an honorable mention include Sara Giffin’s All Seeing Eyes, a Renaissance-era family portrait in which the heads of family members have been replaced by surveillance cameras; a video blog Get To Know Me by Maya Hysaw; and a “triangulated” version of a photograph of the U.S. military ship, The Arleigh Burke-Class Destroyer Benfold, by Darby Anderson.

The variety of projects in this year’s Showcase and Online Exhibitions highlight the range of media including videos, digital illustrations, digital collages, software applications, podcasts, and more. 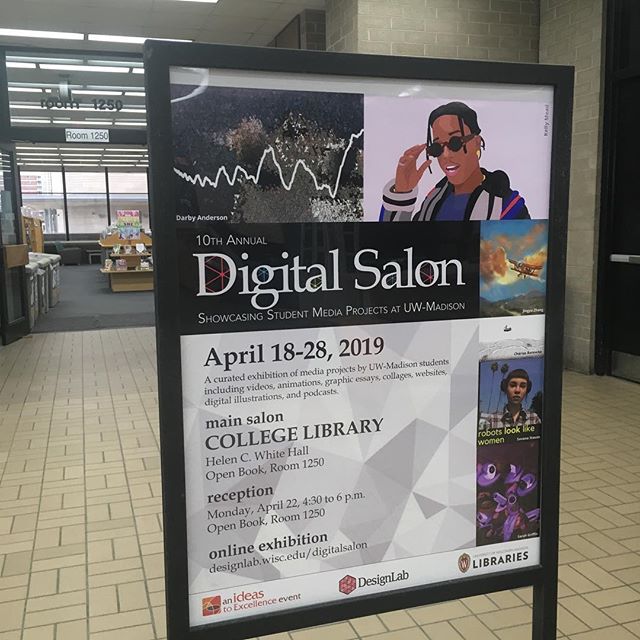