The 9th annual Digital Salon is on display at College Library from April 13-22. The exhibition brings together students, both undergraduate and graduate, to showcase artistic and research-based projects that take digital form or rely heavily on IT in the production process.

Mandy Morrow, who is in her first as Associate Director of DesignLab, notes, “I am impressed with the variety of this year’s submissions and I am excited to take over and continue this wonderful exhibition of UW-Madison student work.” In all, twenty-eight pieces were selected to be included in the online exhibition and range from an animation of President Abearham Lincoln in Bear Force Two to a digital image by Tatiana Shirasaki that addresses the Syrian refugee crisis.

Over a dozen images were printed and displayed in Open Book, Room 1250, at the library. Among them are digital images and time-lapse videos related to the design of four book covers created by Chris Kolmorgen, who received the Best-in-Show Award. The four book covers were a form of fan art, which allowed Kolmorgen to interpret the texts in an emotional way for both himself and viewers of the art.

The use of drone technology in the creation of projects is a feature of this year’s Digital Salon. A video by Simone and Max entitled Nothing But Blue Skies explores the idea of drone violence and hopes to make viewers consider “what if autonomous machines eventually become more ethical than the humans who design them?” Aaron Hathaway also used drone footage in København fra Luften [Copenhagen from the Air], a compilation from his travels in Denmark, which received an honorable mention.

A second honorable mention was awarded to “College Daze” by Dequadray White. This podcast explores what it is like to be a Black college student in a predominately white institution. Other projects that involved race issues include Hattie Grimm’s Power to the Polls. This poster is a “celebration of the election of Andrea Jenkins (DFL, MN) the first black transwoman elected to public office.”

To see these projects and more, please stop by College Library, Room 1250, or visit the online exhibition.

The Digital Salon is organized by DesignLab and the UW-Madison Libraries. 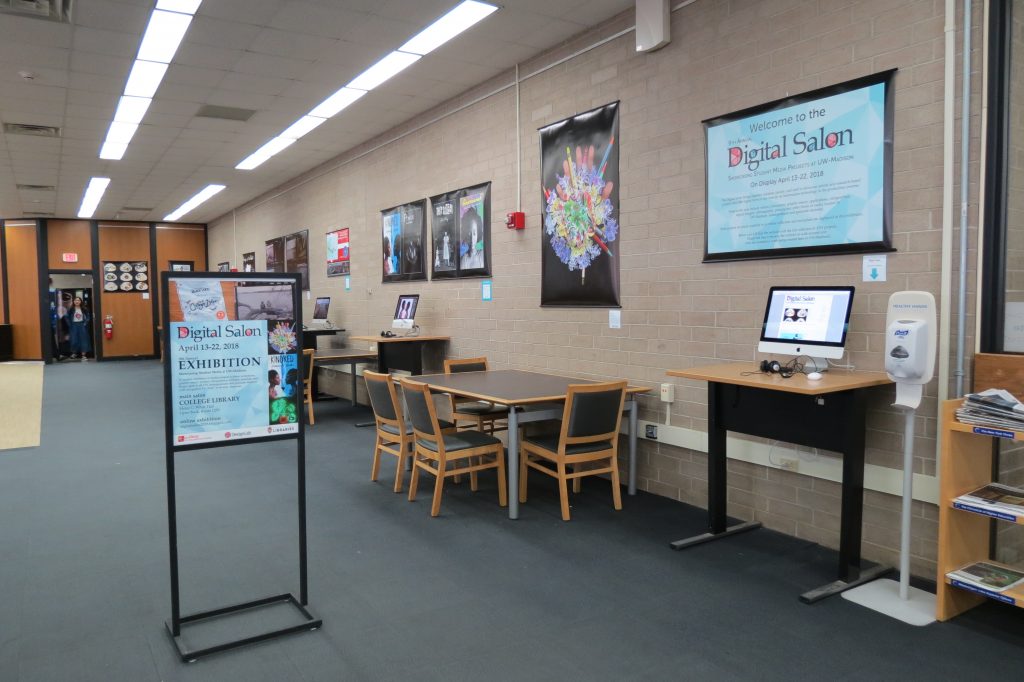