On a day when most of the country is looking to the skies in anticipation of a solar eclipse, it’s appropriate to recount the adventures of a sci-fi novel that has taken 42 years to return to its home planet, College Library. Checked out in the spring of 1975 by one Gordon “Rabbit” Dean, The Alien Way by Gordon R. Dickson features a character, Jase Barchar, who attended UW-Madison (“… for a moment the sharply pitched streets and wooded campus at Madison rose in Jase’s mind’s eye, and then vanished.”) Jase is the only man in contact with the Ruml, creatures bent on the conquest of the Earth; his mind is inextricably linked to that of Kator, leader of the expedition that would spearhead the invasion.

Although Gordon reports having read The Alien Way “countless times,” he remembers his first time reading it was on campus. “I do know that the hours I spent reading it the first time in the Physics building, led me to walk home past some tennis courts where I met with the mother of my oldest child. I suppose that is why I kept the book – it brought me such good memories.” Indeed, after a dropping out of UW-Madison, moving to Key West to work on shrimp boats (where he lived next door to Jimmy Buffet), and a subsequent career with a marine construction firm on the Great Lakes, Gordon is surprised that he held onto the book through at least a dozen moves in the past forty years. He says, “I have bought, read, and given away literally hundreds, if not thousands of books. Every time I moved, I purged books, but through it all, this book survived and stayed with me.”

Last month Gordon, who now lives in Michigan, reached out to the UW-Madison Libraries about coordinating this book’s return mission and Kerry Kresse, appropriately enough the Physics and Astronomy Librarian, responded by saying we would welcome the novel home. The book survived re-entry and arrived at College Library last week. The Collection Management Team is working on determining its final disposition.

But many thanks to Gordon for a great story on the power of stories to move us and provide a lifetime of inspiration. (No overdue fines have been imposed.) 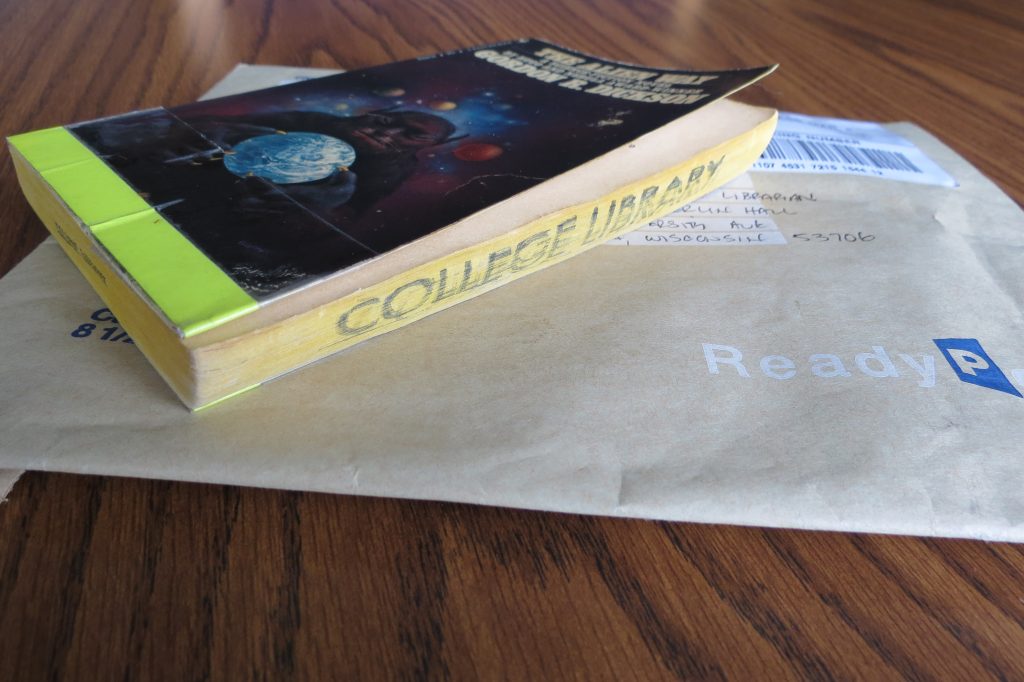