Like the Thordarson Collection (acquired just after World War II), the Duveen Collection was acquired by the University of Wisconsin to enrich its library holdings in support of historical studies of science and technology. 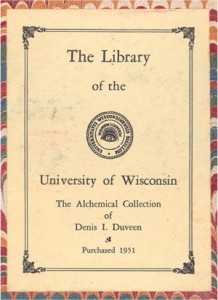 In his first year studying chemistry at Oxford, Denis I. Duveen began acquiring early books on chemistry and related disciplines, and intensified his collecting while working at the Collège de France in the years just before World War II. He stored the collection (in precarious conditions) in occupied France while he returned to Britain to participate in the war effort, recovered the collection after the Allies’ victory, and relocated to the United States where he established Duveen Soap Corporation in New York. He then published a catalog of his collection, refocused his collecting efforts on the work of Lavoisier, and sold the rest of his collection of alchemy and early chemistry (minus the Lavoisier materials) in 1951 to the University of Wisconsin. The Duveen Collection of early chemistry and alchemy now forms part of the holdings of the Department of Special Collections.

Finding Titles in the Duveen Collection

The Duveen Collection in Special Collections contains nearly 2500 titles, of which nearly half were published before 1700. Titles in the Duveen Collection are all cataloged in the online library catalog with call numbers beginning Duveen D. Special Collections also holds a number of Duveen’s articles and offprints on chemistry and its history, as well as the typescript manuscript (in multiple loose-leaf binders) of his Bibliotheca alchemica et chemica.

On the occasion of his visit to Madison in 1955, Denis Duveen presented the university with an early Wedgwood portrait plaque of Joseph Priestley, which today hangs in the Special Collections reading room.

For more about Duveen and his collection, see such works as